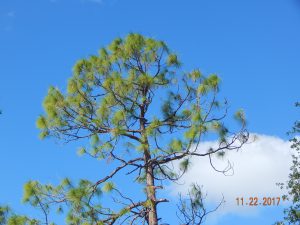 Pines had needles looking like they were frozen in the direction the wind hit them. This is hard to see as picture quality degrades in this BLOG format.

Pines Beetles Inhabit Dying Slash Pines, but are not Primary Cause

Since Hurricane Irma (Sept. 10, 2017), there has been a steady increase in the number of homeowners contacting the Collier County University Extension office about bark beetles and their declining slash pines or logs. These beetles colonize (not attack!) dying and dead pines. Many stands of pines have sharply declined since Irma’s winds whipped them around. Externally they may look okay, but internally there may be internal injuries called “shakes”, a separation of vital plant tissues that eventually cause the tree to die. 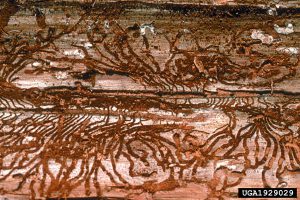 This fanlike tunneling
damage underneath the
bark was caused by the
boring of the larvae.
This feeding severs the
water and nutrient
pipelines of the pine.
Photo by: T. Tigner, VA.
Dept. Forestry .

Research on pine beetles affecting slash pines at Myakka River State Park in Sarasota County indicates that the six-spined ips pine bark beetle, Ips calligraphus, is probably the predominant beetle infesting stressed pines in our area. The black turpentine beetle, Dendroctonus terebrans, may also be present in the base and root flares of trees. They are most active during hot weather. Foliage symptoms of bark beetle activity resemble root damage or chlorosis (nutrient deficiency) symptoms. Needles of infested trees turn from green to yellow then red to brown. Small, reddish-orange colored masses of resin or white pitch resembling popcorn and small holes with sawdust along the lower ten feet of the trunk. The beetles leave 1/16 to 1/8 inch round holes in the outer bark. Reddish orange boring dust may be found in the bark crevices or underneath the tree. Adult beetles are small, about 3/16 inch long and are dark brown to black in color and have minute spine-like projections at the end of their wing covers (front wings).

Adult six-spined Ips beetles are about 3/16 inch long and initiate the brood galleries when they deposit eggs. Photo by: T. Almquist, U.F.

Male beetles initiate the gallery and release pheromones to attract females which deposit eggs and several days later the eggs hatch. The larvae (white, no legs, orange-brown head) eat the inner bark of the host tree. Trees are damaged from the excavation of galleries in the phloem (food conducting cells of the plant). These galleries cut the flow of the phloem and essentially girdle the tree internally. In addition, the adults carry a blue stain fungus into the tree. This fungus eventually plugs the xylem (water conducting cells of the plant) as well. These beetle have many generations each year, so trees can be attacked almost all year.

The six-spined Ips beetles don’t bother healthy trees, rather they cull the sickly pines. It is almost impossible to know when beetles may attack a particular tree as it is difficult for us to tell when a pine is stressed. So if what appears to be a healthy pine in your eyes is harboring bark beetles, rest assured it is a tree that was already on its way out, the beetles just hastened its demise. The tree death is not related to the bark beetle activity. One forester compared the bark beetle control idea to attempts to eliminate the maggots from a road kill. The dying slash pines are not an insect caused problem. For this reason we do not recommend pesticide applications. Even if you had the perfect remedy to eliminate the beetles, the trees are still going to die.
Frequent scouting and removal of declining trees is highly recommended.