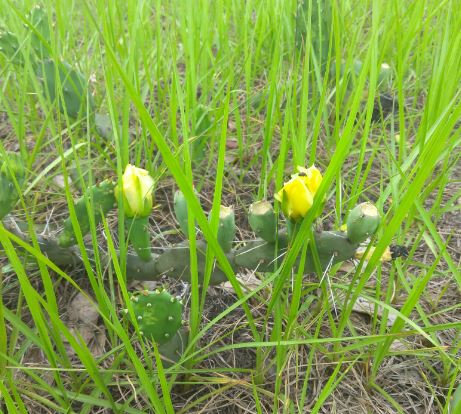 Don’t Get Caught in a Prickly Situation

Livestock owners are used to dealing with a wide range of weeds that can infest the pasture. Some of these weeds posed mere annoyances while others can just be downright hazardous. One of those hazardous weeds is called Prickly Pear Cactus, which can be found on dry, sandy soils and can be very problematic in pastures. This weed can reproduce from each cactus pad, becoming an issue if pasture managers decide to try to eliminate the weed by mowing. Some weeds can be reduced by mechanically mowing, but this method will actually fragment the cactus and increase the infestation. Another issue with prickly pear is that grazing animals can be severely injured by the cactus quills if they forage too closely. These quills can be difficult to remove and often break off still lodged in the skin, potentially causing infections. Since cattle and livestock are aware of the dangers of the cactus, they generally will avoid grazing in the general vicinity. This loss of grazing area can greatly decrease the amount of available or usable forage in a pasture, thus reducing livestock productivity. Because the cattle will not graze close to a single prickly pear, a 6 to 8-inch perimeter of ungrazable grass is created around the plant.

For small infestations of prickly pear, mechanically removal of the whole plant, including the roots is recommended. For larger infestations, several herbicide options exist for control in the pastures. Recent experiments conducted at UF/IFAS have found that broadcast applications of Vista XRT and TrumpCard herbicide at recommended rates can effectively control prickly pear. It is important to note that herbicide methods will take time and control of the prickly pear is not rapid. After application, treated cactus quills turn gray and cactus pads will swell and turn green/gray and the prickly pear can remain in this status for 6-8 months. Depending on the severity of the infestation, re-treatment may be needed. If you are concerned about how to treat this troublesome weed, or have questions regarding any other weeds within your pasture, please contact your local UF/IFAS county extension agent.

← A Call for Agri-Techi Youth!
Benefits of Trusting Youth as Scientists →