Native to the southeastern United States, Muscadine grapes have been cultured for more than 400 years. Sometimes referred to as scuppernongs, Muscadines are an old time southern favorite. Although their insect and disease tolerance makes spraying pesticides unnecessary, pruning your Muscadine grape vines is needed for reliable production.

After a grapevine has been trained to grow on a trellis system, it must be pruned yearly to keep it manageable and maximize fruit production. Since grapes are borne in clusters on the current year’s growth, the side shoots growing from the cordon or main shoot should be cut back during the dormant season. The following spring, the buds on these side shoots will develop into shoots that produce flowers and fruit.

The best time for major pruning is from mid-January to mid-March, although touch-up pruning can be done at any time. The standard rule is to remove last year’s fruiting wood (side shoots), leaving spurs with 2 to 4 nodes (buds), and spurs spaced about every 6 inches of cordon. Spur renewal may be needed every 3 to 6 years so that new fruiting wood (nodes) are never located more than a foot from the cordon. Spur thinning can be accomplished by removing entire spurs or part of them.

After 5 to 10 years, it is not uncommon for cordons to lose vigor or die. If this happens, simply select another young shoot to train along the wire and it will become your cordon the following year. 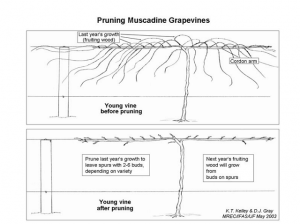