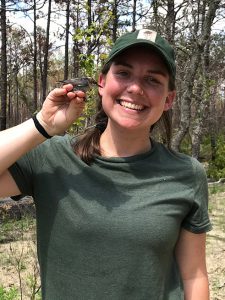 What do you study?

I study brown-headed nuthatches! My MS work was specifically focused on a population of them in the Everglades.

What did you study about them?

We were interested in personality traits. There is growing evidence that slow-exploring birds tend to have higher fitness when introduced to novel environments.

The brown-headed nuthatch population I studied was reintroduced to the area about 20 years ago. They are one of the few examples of a bird that has been successfully reintroduced to a habitat it no longer occupies, so it’s important to study this population to learn what went right, so that we can improve other reintroductions in the future.

There’s been little study about the relationship of animal personality to success in conservation, so we were interested in bridging that gap and seeing whether or not personality type had any effect on the success of these birds in the Everglades.

Specifically, we were interested in whether there was one personality type that was overrepresented in the Everglades population, so we could see whether this growing evidence that slow-exploring birds fared better was true. That seems to be what we found!

What defines a slow-exploring bird?

In tests of exploratory personality, we typically take birds and put them in an exploratory chamber, which can be all shapes and sizes. I used a small plastic bin.

We would put them in and count the number of flights and hops, the number of positions they visit within the pin, and also their scanning intensity (so head turning), which in birds is related to vigilance and can be a proxy for exploratory behavior.

Birds that explore slowly will visit fewer positions within the exploratory chamber, they fly and hop less, and they can scan more or less. Scanning can go either way, but a fast bird will visit more perches more quickly inside the exploratory pen.

It turns out that there are a lot of fitness consequences of exploratory behavior. Fast exploring birds tend to disperse more quickly, which can leave them wide open to predation. My advisor did a study in South America that was the impetus for this study. They translocated birds from unfragmented and fragmented habitat to a novel patch, and the birds from the fragmented habitat were much slower explorers, and were much more successful at dispersing out of the novel patch.

Those fast explorers dispersed quickly, died much more quickly, and were much less successful at reaching a new forest patch, so that means there are fitness consequences for birds reintroduced to a novel patch that come from unfragmented habitats. Fast explorers tend to form routines much more quickly, which leaves them much more behaviorally inflexible when you put them in a new environment.

It was kind of crazy to do this work, because animal personality is only just emerging as something to be taken seriously, so the repeatability and replicability of these studies is still being developed. As scientists we’re trained not to anthropomorphize, so we don’t tend to think of animals as having personalities, but we’re finding that personality type has consequences.

Where were the brown-headed nuthatches reintroduced from?

What led you to study birds?

I grew up wanting to be a veterinarian, but when I got to school I realized that being a veterinarian meant sitting in an office all day, so I did a wildlife internship off the coast of North Carolina. It was focused on alligators and deer, but my boss was a big birder, and introduced me to the birding world.

That was my sophomore year of undergrad. When I got back, I switched majors to ecology, and have been chasing birds ever since!

Once I graduated I took a job Archbold Biological Station to study scrub jays, then I went to Australia to study cooperatively breeding fairy wrens, then came back to Tallahassee about four years ago and started studying brown-headed nuthatches. I’ve chased cooperative breeders around the world!

What are you doing next?

I started working with brown-headed nuthatches at Tall Timbers Research Station, they funded my MS project, and I’m going back there now!

I’m going to be in the avian ecology lab, continuing to work with nuthatches, and doing some work with grasshopper sparrows and red cockaded woodpeckers as well.