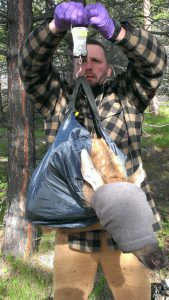 Justin Gude is the Wildlife Research & Technical Bureau Chief for Montana Fish, Wildlife, and Parks. He graduated with his BS at WEC in 2000, and later with his MS from Montana State University.

How did you become interested in ecology, do you have an origin story?

I was always interested in animals. I grew up in Gainesville, and my brother and I spent a lot of time looking for sharks’ teeth in Possum Creek. I didn’t know that ecology was a field of study until my senior year at Eastside High School, when one of my high school teachers, Ms. Ann Marie Heller, introduced me to it. I originally enrolled at UF in the pre-veterinary program, then switched to wildlife ecology.

How did you wind up in Montana?

I did quite a bit of work as a field technician, and traveled all over the place.

I actually worked for Dr. Katie Sieving on quite a few projects, including in South America. One of the jobs I had while I was an undergrad was on a long-term wolf-moose study in Isle Royale National Park. I spent a couple summers doing that.

My wife, Patricia Gude, also went to the WEC program at UF, and graduated a year before me. After I finished, we spent six months driving around the west and backpacking in wilderness areas, trying to figure out where we wanted to go next, and really fell in love with Montana.

After that, we actually lived in Alaska for a couple of years, where I worked as a wildlife biologist for the Fish and Wildlife Service before coming back here. 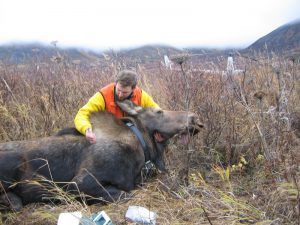 What do you do in your current job?

When I first came back to Montana, I was a wildlife biometrician for Montana FWP, meaning I made estimates of harvests of all the game species and provided statistical support for research projects to help make harvest management and conservation decisions, such as, “Where are we going to purchase habitat?” and “what should the harvest quota be?”

I now work as the supervisor for that position, because when my supervisor retired I applied for his job and got it. I run the wildlife health program, the statistical support functions for the Wildlife Division and the wildlife research program. Running the research program consists of establishing research priorities, supervising research biologists, and serving as the liaison for the university projects we run through the co-op unit or otherwise.

What’s your favorite organism you’ve worked with?
That’s tough! I’m interested in everything, and in this position I work with everything, game and non-game alike. I really like the diversity, because I don’t have a favorite taxa. 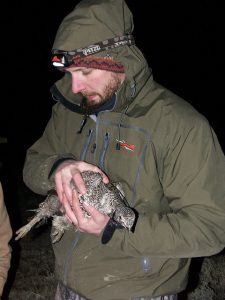 Ungulates are the taxa that I’ve done the most work with, because of the public interest, which can be controversial and are of particular interest here where essentially half the population over age twelve hunts. Maybe my favorite ungulate is the moose, because they are just so enormous, and I’ve worked on them in Alaska, here, and in the upper Midwest quite a bit. I really like snakes, too!

Having grown up surrounded by them in Florida, it’s such a stark contrast to here where we only have a few species.

If you could call yourself back when you finished from undergrad and give yourself advice, what would you say?
I remember having a lot of anxiety at that time, and I guess the advice I would give myself now is to take it a little bit easier. That period of uncertainty, particularly when you don’t have a lot of commitments yet, can be really valuable in terms of development. I got so much out of those field tech jobs, traveling around to work on various projects, and some of my best memories are from doing that kind of work. I would tell myself to embrace that period a little bit more than I did, because I was always looking for what would come next, and worried about it more than I should have. 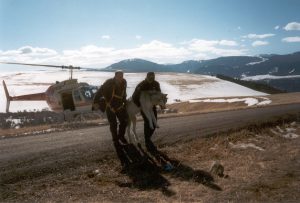 This interview by Rhett Barker, and has been lightly edited by Claire Williams and Rhett Barker for clarity.

Thanks to Justin Gude for speaking with us!

Learn more about the UF/IFAS Department of Wildlife Ecology and Conservation here.