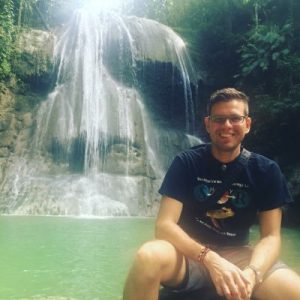 What is your research on?

To understand the drivers of species distributions, I work on two main systems.

One is an orchid system, endemic to the mountains of Puerto Rico. It allows us to understand the mechanisms that drive local colonization and extinction dynamics. It also allows us to understand how dispersal, abiotic factors, and symbiotic interactions influence species distributions in a very simple system. There are 975 patches altogether, and I have a couple of collaborators that have collected data there for 10 years. It’s a massive dataset.

I’m also interested in tropical mammals. In the last few years, I’ve been collaborating with people that are engaged in the TEAM (Tropical Ecology Assessment and Monitoring) dataset. It’s a network of camera traps deployed all over the tropics. We can use statistical and modeling approaches with the data from those traps to understand what’s driving range shifts in populations of tropical mammals. It’s an interesting group to study. When we think about climate change, we often think about species responding to climate change in the same way:

They’re probably going up the mountain because it’s becoming too warm at the lower elevation where they live now, but we’ve found that not all species are the same, and the effects of warming are often idiosyncratic.

Some species like to move up, others like to move down, and some don’t mind the changing temperatures and stay in the same place.

So that’s the species distribution part.

I’m now focusing my research program on diseases and disease ecology, and I’m very interested in this idea of virulence evolution: why do parasites harm their hosts?

It’s almost a philosophical question. If a parasite is dependent on its host, then why kill it?

The short answer is that they end up killing it because they use their resources for reproduction, but it’s a fine balance.

I’m interested in bird malaria and lizard malaria. I conduct more research on the lizard systems. Only a handful of people study them, and it’s really interesting!

A Plasmodium parasite is transmitted through a vector. It works in a similar way to malaria in humans, but lizards are way more fun to work with!

They’re ectotherms, which means that the way climate change is effecting the system is even more detectable than it is with mammals.

Sample sizes can be really high. They are the most abundant vertebrate in Puerto Rico, so we’re not going to run out of them any time soon.

One, how is the environment influencing transmission in the long term?

One of the things we’re interested in is: what are the overall implications of that for transmission?

So those are my two main areas of research: one looking at species distributions, the other looking at disease ecology and evolution.

That’s fascinating! How did you become interested in wildlife and ecology? Do you have an origin story?

I’m guessing everyone has a similar answer: that it’s related to when they were growing up.

My grandparents grew coffee and sugar cane in the west coast of Puerto Rico, and when I was growing up, we often visited the abandoned coffee plantations that my family owned.

I had a lot of fun being in the field. The tropical forest is my happy place, it’s my habitat, and more than that, I was always curious about what I saw outside.

Why did some orange trees have more oranges than others?

Why is there pasture in one particular place, and trees in another?

When I went to school, there was a period of time that I wanted to be a medical doctor, but I’ve never liked hospitals, so it was kind of confusing. I intern in one for a couple weeks, and that convinced me that I didn’t want to be a medical doctor. I started doing ecological research as an undergrad, and I loved it! I loved the tropical rainforest, and I loved asking questions outside, so I decided I would dedicate my life to doing the thing that I enjoy the most.

The quantitative part came in a haphazard way. When I was a master’s student, I was collaborating with a friend, and we were developing recorders to get sounds from birds and amphibians. We tested them in the field, and found that the machines were better than us. Then we started thinking: after recording all those sounds, you have to listen to them, and that’s a lot of work!

So we asked ourselves, “Well, what if we can build a program that identifies the species for us?”

One of the first things we did was try to collaborate with people that could help us with that problem. We started working with computer scientists and with people that were doing machine learning to explore how different signals could be identified automatically using computer algorithms.

I became fascinated with this idea of collaborating with people who are not ecologists, and have all these tools that we are not used to, and who do things that are very different from what we do. I found that there there was a lot of potential in those collaborations, and I enjoy them to this day. I’ve collaborated with computer scientists, with statisticians, mathematicians, and more recently with industrial and systems engineers.

What do you do with industrial and systems engineers?

When you have a limited amount of resources to protect habitat, which areas do you choose?

The problem is that you have to pick which places to protect now, without knowing what’s going to happen in the future. You don’t know which part of your network of protected areas is going to get disturbed, and which part won’t. That’s a difficult problem, because nobody knows how to predict the future. As it turns out, they have already solved it, but in a military setting. Imagine that you have a network of military bases. You have an enemy that’s going to attack you, but you don’t know where. So they solved this problem in a very clever way. They assumed that they have a virtually intelligent enemy, with complete knowledge of the system, who will try to attack the places that will harm it the most. Once you know your worst case scenario, you can develop protected areas so it doesn’t happen.

We can assume that we have a virtually intelligent enemy that will disturb the weakest point on our network, and then develop protective measures. That’s something we worked on. It was a lot of fun, and we got a lot of really nice models from it. We’re still working on a lot of these types of projects now.

When I tell my story about malaria research, I often get two responses.

One is an exclamation: “There are lizards with malaria!?”

I have to say “Yes, some lizards have malaria” and then they ask me: “Can I get infected?”

You are not likely to get infected by a lizard parasite, but I get that question all the time.

I’m a time management nerd. When I started grad school, I had a really nice master’s advisor at the University of Puerto Rico. Shout out to Mitchell Aide!

The first thing he gave me to read was a book called First Things First.

It’s about how to prioritize things in your life.

I also have monthly and weekly plans. When I prepare for my week on a Sunday evening, I know exactly where I’m going to be on that Thursday at 3 PM. I organize my tasks for the week so I’ll have enough time to do my work and for important personal things.

I’m reading a book called Brain Rules. It was written by John Medina, a psychologist. It’s about the principles for surviving at home, work, and school. It’s evidence-based knowledge on the things that make us the way we are: how memory and learning works, how exercise is really important to thrive in work because that helps bring oxygen to your brain.

How sleep is important: he presents all the evidence about why you shouldn’t skip it because it’s related to a lot of our cognitive processes.

He also talks about how multitasking doesn’t really work, and actually does more harm than good. Now in the era of multimedia devices and smart phones, being able to manage your focus is really important. I really enjoy this book!

If you could call yourself back when you were in undergrad and give yourself advice, what would you say?

I’ll say don’t waste time! Time is the only thing that we have.

I don’t think I have wasted too much of my time, but maybe a little bit.

Sometimes you start projects, and they don’t go anywhere, so it’s really important to know when starting on a project that you are very passionate about it, and committed to seeing it through.

I’ve finished most of the projects that I’ve started, but there have been a few that I wasn’t really into and that time went to waste.

Was there anything else you wanted to talk about?

Part of my job is teaching quantitative methods to non-math majors. I’m interested in teaching math to students that are not math-oriented. Most of them aren’t. We went into wildlife ecology because we like to be outside, so now we have to learn all these things that we were not really interested in at the beginning. My task is to try to motivate students and to teach math in a way that alleviates their anxieties, and to do it in an informal but meaningful way for these students who would rather be outside. For me, it’s a challenge and a passion, and I’m very happy every time that I go out and teach. 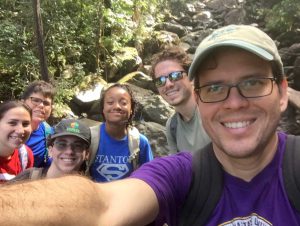 Thanks to Dr. Acevedo for sitting down with us.