Steven Longmire is a WEC senior.

We spoke with him about his work this summer.

In terms of on campus work, I’ve lately been sorting through a lot of photos of birds. We had 8 cameras out on the historical bars. We’re trying to monitor the behaviors of birds, and determine how they’re utilizing the reefs. Soon I’ll start sifting through benthic samples and identifying what lives on the bottom in those areas.

I’ve been driving the boat a lot, which has been really fun and sometimes stressful. I boated a lot growing up, but this is a real learning experience! Thankfully, Steve Beck and Peter Frederick are good teachers.

Lately the field work is trying to map the elevation of the different reef elements, using sonar to find unknown subtidal oyster reefs, and downloading data from our water quality sensors that we have spaced around the reef. There are also some bird behavior trips thrown in there every once in a while to see how terns and pelicans use the surrounding area. The goal is to get as much information about the area currently before the construction begins, so that we can compare the post-construction outcome.

It’s almost always a good time when we go out there because it’s a beautiful place to be. Plus the team gets along really well, which adds to the experience.

What’s the overall goal of the project?

To restore a historical oyster reef called Lone Cabbage Reef. It’s about 3 miles long, just south of the mouth of the Suwannee River and north of Cedar Key. It used to act like a leaky dam, helping to hold freshwater in, and maintaining a lower salinity in that ecosystem than in its surrounding areas, which is crucial for oyster survival.

The reef degraded over the last century from oyster beds to heavily eroded sandbars, and, as time goes on, it gets harder for the oysters to re-colonize because oysters need a medium like rock or other oyster shells for their spat to colonize. It’s a bit of a vicious cycle. So the goal is to provide substrate that allows the oysters to rebuild the reef naturally. To do this, we are carefully putting in 17,000 cubic yards of limestone boulders for the three miles it stretches.

The rock construction begins in July, so we will see what happens! The whole team is eager to see the results.

How did you get into wildlife? Did you have a specific experience when you were a kid?

Not really. In college, I originally wanted to do environmental science, but it ended up being a little too vague. I wanted to do something more in depth. I learned about the WEC program, joined, and have loved all of it!

I grew up in Brevard County, FL, surfing, fishing, dirt biking, and hiking. Wildlife work never crossed my mind until I was at Santa Fe College and found out about it. It’s something I’ve really grown into and am now hooked.

When I was in Martha Monroe and Taylor Stein’s class, FOR 3202 Society and Natural Resources—that class and the readings from it put into perspective what this kind of work entails, and got me really excited. Especially the policy and human dimension aspects.

And the gulf is wild! 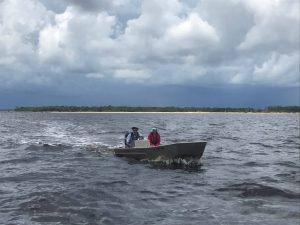 It’s pretty crazy. Navigating via boat has been insane. We definitely try not to hit the oyster bars, but when it’s low tide it is tricky. We regularly hire oystermen to take us out, because they know the area better. They’ll go on these crazy routes that we definitely would not follow otherwise. Their directions are like, “Line up this bush with a patch of grass on this island, then cut straight across, then immediately zig zag back across to a channel.” We definitely have to pay attention because we don’t get many second chances when it comes to hitting an oyster bed before something breaks or we are stuck.

One of my favorite things about the project is when fishermen pull up next to our boat to ask us questions and see how everything is going while we are on the water. It’s equivalent to someone pulling up next to your car and rolling down the window to chat. They are always interested in what we are doing, and are excited about the potential outcome. Meeting the locals and forming a relationship is important, since they are the ones out there every day making a living.

I don’t think I could have asked for a better project to be a part of, and feel very fortunate to be learning so much. It’s great working with people I look up to, and at the same time, feel connected with. 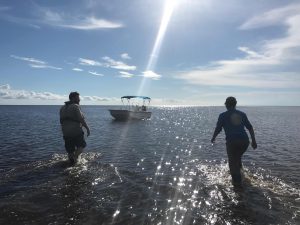