You only have one name! That’s so cool!

It’s not compulsory in Indonesia to have a last name, only in certain tribes. The rest just have one or two names, but the second name is not necessarily your family name.

Tell me about flying foxes. 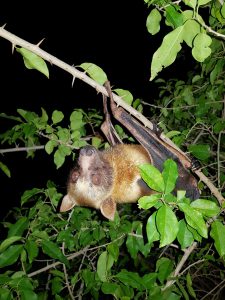 Flying foxes are the biggest bats in the world. You can’t find them here in North America; they mostly range through Asia, northern Australia, the South Pacific, and islands off the coast of east Africa.

They eat fruit and drink nectar, so they provide services to their ecosystems as seed dispersers and pollinators.

I went to Sulawesi last year, and studied how they pollinate economically important plants, and also to see their general diets.

You discovered that they pollinate durian, right?

It was already a well-known scientific fact that bats do this in Thailand and Malaysia, but we didn’t know what pollinated durian (an Asian fruit with a pungent aroma) in Indonesia. My research is the first that reveals they do this in Sulawesi!

In Malaysia and Thailand, they’ve found only one or two species pollinating durian, but in Sulawesi the community of pollinators is more diverse.

I found three species of bats pollinating durian, including the Flying Foxes and also the smaller fruit bats.

Since I was a kid!
My father had a farm, and every holiday I went there with my family. I spent my childhood planting strawberries, tomatoes, things like that.

Our farm was located four hours from the city, and we had to pass a national park to get there. 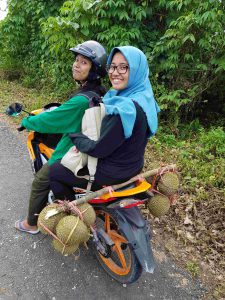 When we were driving, I would notice lots of foreigners, which I thought was very strange.

I always wondered, “Why would all these white people walk along the roads with binoculars?!”

I asked my father what they were doing, and he said, “Oh Shera! They want to see our birds!”

I thought, “Our birds?!” I hadn’t thought about them before.

So the appreciations of non-Indonesian people sparked my interest in biodiversity. I also saw the national parks being converted to monocultures. A huge flood happened because of the deforestation, and I experienced it myself. I saw the destruction caused by human beings in a forest.

Maybe I am a unique case in Indonesia, because I wanted to work for the forest since I was in elementary school.

Most people I interview have a similar story, but you have a very intense and unusual version of it!

Maybe it’s less common to know what you want to do in Indonesia. Usually people don’t really know what they want to do when they are kids. Parents just want their kids to be a doctor or a teacher. They call you a successful person if you are a government officer, too.

So me, I’m not a successful person (laughs).

It’s very difficult to study these bats, that’s why no one wants to.

They are very big, and live in isolated places. First, you have to travel around to look for their colonies, and second you have to figure out how to capture them, because they fly really high, like higher than a coconut tree.

Then, after you catch them, you have to know how to handle them, because they’re like angry puppies. 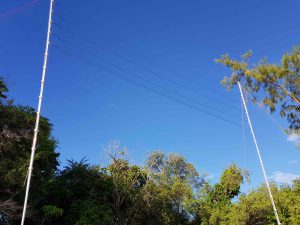 How do you catch them?
With a mist net on poles. The poles are ten meters (33 feet!).

Imagine how it is for short people like me!

So they are ten meters tall, and we stretch twelve meter mist nets between them.

It must be really awkward even just to stand those up, they must be wobbly!

We have to tie the poles with ropes to nearby trees. It’s actually the same system that we’d use here, but my advisor and I decided to add extra poles to make it tall enough to catch the flying foxes. 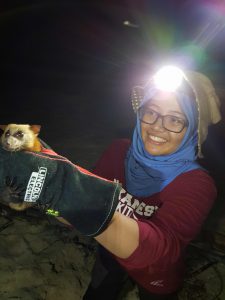 Leather gloves! If you use regular cloth gloves, the bats’ sharp teeth will pierce through. It still hurts when they bite, but you won’t bleed.

I’ve worked with a lot of animals before: birds, sea turtles, primates, but then I met someone, Susan, who inspired me to work on bats. She convinced me by talking about how mysterious they are. No one really knows what they are doing in the darkness. I’m just very curious about them!

Also, they are very cute! They have very large eyes, and look like dogs. Even now, I’m opening my phone’s photo gallery and giggling because they are so cute.

Mysterious and cute, that’s it! 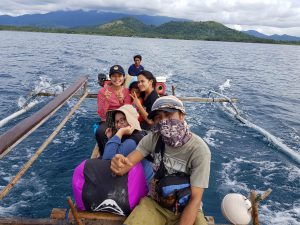 For me, the unexpected experience was mostly dealing with mosquitoes. Even though you expect in a tropical rainforest that there would be plenty of mosquitos, people avoid living on the island I worked on because there are millions of mosquitos there. I had to stay on the island for weeks while we were working there as it is an hour from the mainland. All the bug repellents from America and from Indonesia just didn’t work. It was very challenging to concentrate on capturing and measuring the bats while dealing with mosquitos.

It was an unexpected experience for me. We even tried mixing bug repellent, shampoo, and soap, which worked, but we had to reapply it every two hours.

The problem was that there was no fresh water, so we became sticky for weeks!

Of course we swam in the sea, but still!

It was very uncomfortable. Even the locals called us crazy; they couldn’t believe that we would stay on islands famous for mosquitos.

During fieldwork, we would mist net at two AM, then go to sleep at eight, then wake up at two PM, sleep at six PM, and wake up again at ten PM.

We compensate for the sleep we missed during the night in the morning.

How do you balance long periods in the field, or in the US, with your personal life back home?

I text and WhatsApp people a lot. It doesn’t cause too many problems, except that the time difference sometimes makes it hard to have a fast conversation.

The air is fresher than in Jakarta, Indonesia, and there are not so many people around!

There’s time to be alone if you don’t want to talk to people here. In the field, everyone is always talking and it’s hard to find time to yourself.

What are you reading? 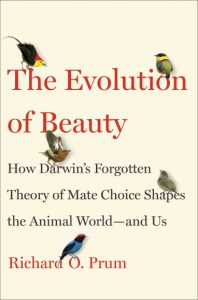 Also, I really like adventure- and evolution- themed books.

I recently read The Evolution of Beauty. It is very cool!

Biologists really focus on natural selection, and underestimate the mechanism of sexual selection. This book reveals how sexual selection can really drive the diversity of birds, and the implications of it to human evolution.

If you could call yourself back when you started undergrad, what advice would you give yourself?

Precillia Putri. She’s also Indonesian. She studies mammal distributions on oil palm plantations in Borneo. I think it’d be great to interview her!

Thanks to Sheherazade for sitting down with us.