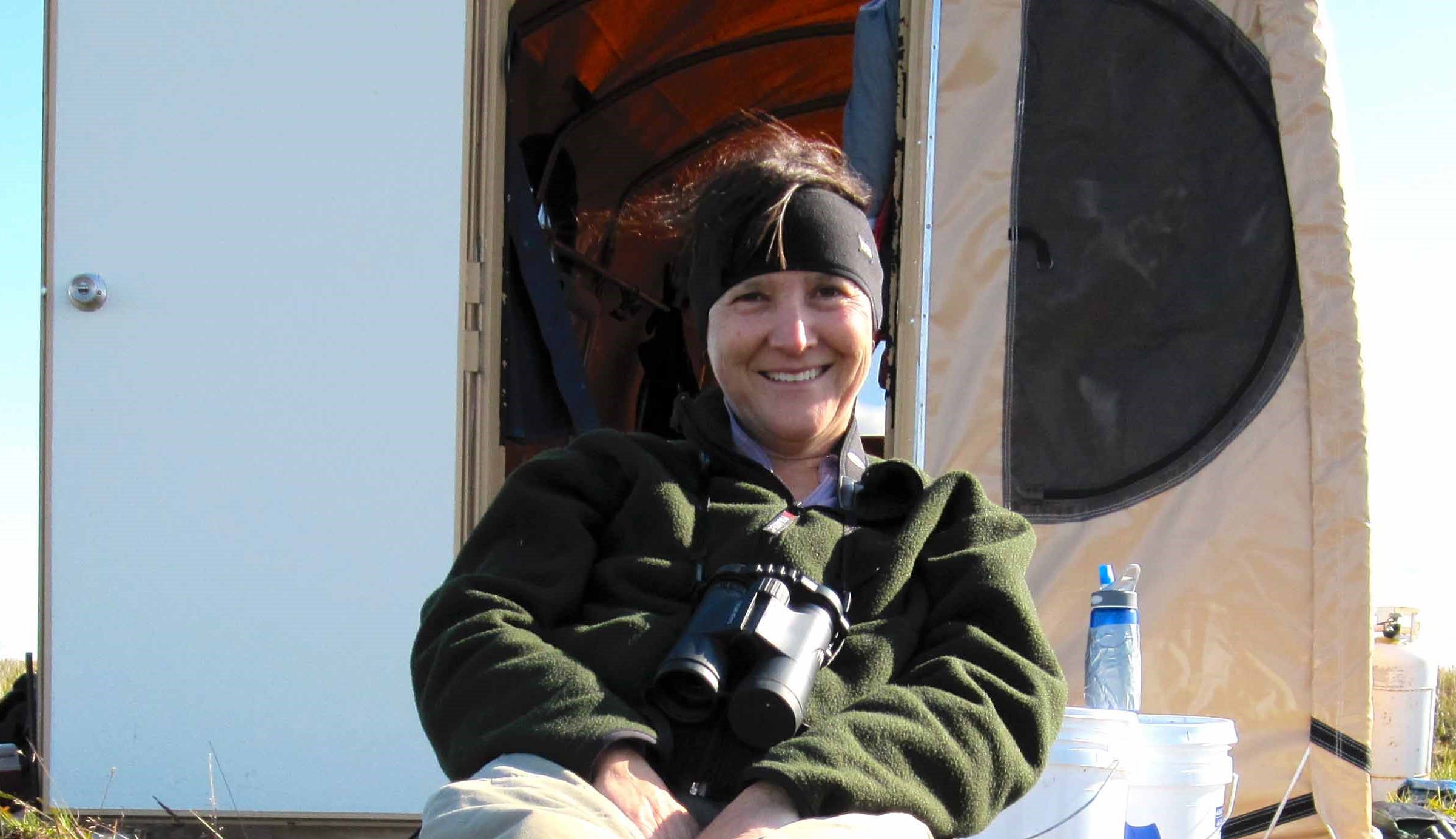 Dr. Abby Powell is an avian ecologist, as well as the leader of the Florida Cooperative Fish and Wildlife Research Unit, a cooperative unit linking scientists at the University of Florida with the US Geological Survey and the Florida Fish and Wildlife Commission. The mission of FCFWRU is to conduct research, provide graduate student training, and address resource management issues, emphasizing the linkages with both aquatic and terrestrial ecosystems.

I don’t have a specific incident, but when I was a kid I loved animals and being outdoors. I was always out in the woods, picking up logs and looking for salamanders. I knew I wanted to do something with nature but I didn’t really know what, because my parents weren’t scientists. It wasn’t until I discovered Wildlife Biology in college, and majored in it, that I found my path.

I wasn’t particularly interested in birds until I took a class in ornithology at Cornell University in the summer time, and suddenly this whole world of warblers and little songbirds, which I hadn’t realized were there before, opened up to me.

Multitasking. That’s probably true for most of us in this profession, but it’s especially true when you’re advising grad students. They’re involved in a variety of research projects, so one day my focus might be on oystercatchers out on Florida’s Gulf Coast, then—I moved here from Alaska, and still have a few students working there—suddenly I’ll be working on a project that we did a couple years ago, all the way up in an Alaskan (and totally different) ecosystem. Sometimes I’ll be working on administrative tasks. I think you really need to learn how to multitask and be able to shift gears at any given moment in the day.

That’s a hard one! I don’t know if I have a favorite, there are so many.

I worked on king eiders in the Arctic. They are just amazing animals. They are sea ducks, and spend nine to eleven months of the year out in the harsh sea ice of the Arctic Ocean, then they come in only to breed on land in the summer time.

They nest in this incredible tundra-wetland region of northern Alaska, which is just so alive with birds and other animals migrating through, and all are coming to take advantage of this really short breeding season. It’s a fabulous system up there, and I think eiders are kind of the pinnacle of that system for me.

They’re spectacular looking — the males have these beautiful colors on them. They’re amazing birds in general, spending so much of their time at sea and on sea ice.

I love shorebirds, too, and do a lot of work on them. I don’t think I have a favorite shorebird, but I love these long-distance migrants. Shorebirds typically follow coastlines, but not always. Some species are freshwater wetlands specialists, and some nest in forests! To me they’re amazing birds. That’s another hard one-you constantly have unexpected experiences, so picking one out is difficult.

I guess, to me, having never lived in the Arctic before, it was the experience of living out on the tundra, hundreds of miles from any other human beings, in the summer when there is such an incredible amount of life. There were birds singing that I had never heard—you know, shorebirds actually sing and display on their breeding grounds. You don’t see that behavior when you’re at the beaches down here, when they’re just foraging and loafing. Just living out on the tundra for weeks at a time, and being far away from any building or road or vehicle, was an incredible experience. There was light 24 hours a day. It was crazy! We slept in tents. You could wake up at one in the morning and birds were singing and the sun was out.

It’s very disorienting– you’d have no idea what time it was. The sun just kind of goes around in a circle above you, and you have tons of energy. We’d put in incredibly long work days. Barrow has flamingos, too!

Every day, I have a list in my head of what I need to do that day. I try to prioritize what needs to get accomplished, do the most important things, and then work my way down. I’m not a person who writes down lists, but I always have a list going on in my head.

I think having some quiet, uninterrupted time is really important, so sometimes when I’m writing or doing data analysis I actually work better from home.

Before I had my daughter I used to spend a lot more time in the field, up to a couple months at a time. Once I had my daughter I kept it down to a week or two. Kids change so much in a short period of time, especially when they’re little, so I really cut back on the time I spent doing fieldwork.

You just adjust your priorities.

I still make an effort to go out in the field, even if it’s just for a day. I think when you’re young and you spend a long time out in the field, you get it out of your system. Sometimes I miss it, but most of the time I think it’s OK. When you did stay out for a few months at a time, how did you stay in touch with your friends and family?

Back when I was working on my dissertation, we didn’t. I lived out on an island that I had to reach by boat, and once a week we’d go back to civilization and make phone calls and mail old-fashioned letters. We had no internet or cell phones, just a radio on the island. Right now, I am reading Commonwealth by Ann Patchett. It’s about a family. It starts in the early ‘60s, and shows how two families connect after two of the characters have an affair. All of the kids are thrown together, and it follows how they grow up. It’s about the complexities of blended families.

Is there one piece of advice you would like to share with students who will read this interview?

Try to get as many variable field experiences as possible, and don’t just stick to the thing you already think is interesting. You might find a new passion and decide you want to change your career. You might decide that, “Hey, I don’t want to work on raccoons, I want to work on shorebirds,” or you might want to become a computer modeler instead of doing mostly fieldwork. I think that without trying some of these things, it’s really hard to know if you are going to have a passion for it. I think it’s important to try to get out and have a lot of experiences. Travel to as many different countries and ecosystems as you can while you’re young and don’t have as many work and family obligations.

I believe people should become good writers—whatever they do. Whether writing a blog or writing a journal article, writing skills are very important. It’s especially important to write so that people who aren’t scientists can understand. Thanks to Dr. Powell for sitting down with us.

If you’d like to learn more about the Florida Cooperative Fish and Wildlife Research Unit (FLCFWRU), click here!