Skip Navigation or Skip to Content
Home » UF/IFAS Wildlife Ecology and Conservation Department » Peat Habitat Loss In The Florida Everglades: Getting The Dirt On What’s Really Going On

Peat Habitat Loss in the Florida Everglades: Getting the Dirt on What’s Really Going on

The Florida Everglades are collapsing. Or, at least, some areas of the park are washing away. Hordes of wildlife enthusiasts and adventurers alike visit the famous National Park every year, but most are unaware of how vulnerable and fragile the ecosystems within the Everglades truly are. And, according to Dr. Stephen Davis of the Everglades Foundation, drastic and sometimes irreversible changes in Florida’s Everglades National Park can be attributed to a matter of inches. Whether one is looking at sea level rise or soil loss, the [hypothetical] difference between life and death can be measured on a basic, everyday ruler.

So, let’s get back to the matter of life and death. The habitats that occur within the range known as the “Oligohaline Coastal Everglades” can be relatively sensitive to any anthropogenic or naturally occurring disturbances. Since the habitats found in these regions of the Everglades are fairly slow to form, many disturbances can wipe them out entirely without the opportunity for restoration. That’s where Dr. Davis comes in. He is currently researching the effects of increased salinity on peat soil and mangrove habitats. Once we know more about what makes these habitats continuously evolve, adapt, and grow, we can hopefully develop ways to manage them properly, especially in the face of disturbance. 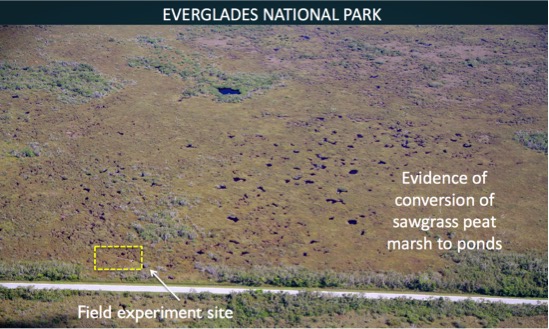 Peat soil accumulates very slowly, with an average buildup rate of three inches every 100 years. It is vital for the plant species that call it home, as they require the nutrients and moisture found within peat soil to stay healthy.Peat typically builds up over limestone bedrock, which increases its susceptibility to excessively dry conditions. Natural disturbances such as prolonged drought can cause peat soil to dry up, wiping out hundreds of years of soil buildup in a very short period of time. In extreme circumstances, drying up can cause the soil to burn all the way down to the bedrock.

On the other hand, too much water can also have a negative effect. Increased water flow or flooding to areas with peat soil can cause the soil to be washed out, creating pockets of messy, slurry holes where the peat used to be.

Along with too little or too much fresh water, salt water brings along its own slew of problems. Climate change, an increasingly hot topic these days, is directly associated with rising sea levels. As this occurs, coastal areas of the Everglades are at risk of being swallowed by the sea, taking place at an average rate of one inch every ten years. While this is damaging enough, another phenomenon is being overlooked: sea level rise takes a huge toll on habitats that are not immediately absorbed by the sea, but are close enough to be affected by the increased flow of salt water to the area. Habitats such as peat soil cannot tolerate the increased salinity.

Take Cape Sable, for example: in the 1920s, canals were dug to relieve the area of some of it’s standing freshwater so that agricultural fields could be created. These newly built canals turned out to be more of a burden than anything, however, as they caused sea water to invade the area. Eventually, the naturally-found sawgrass died and the peat soil washed away, never to be seen there again.

Dr. Davis tested various effects of increased salinity on peat soil by treating several plots of peat soil with salt water and measuring the responses of the soil. He saw negative responses in many characteristics of the soil after treatment: sulfate concentrations, alkalinity, dissolved organic carbon, ammonium, and soluble reactive phosphorus, to name a few. So he basically concluded that salt water is bad for peat soil.

Because peat soil accrues very slowly and can disappear in the blink of an eye, the fight against the overall collapse of peat habitats seems almost futile in the face of climate change and rising sea levels.

But there are ways to slow, or even prevent the loss of this unique habitat.

Currently, computer software that assesses peat vulnerability is being developed so that areas of high risk can be identified and, hopefully, conserved before any damage is done. Healthy peat soil needs to be kept wet and relatively salt-free, so freshwater flow must be restored to the area, while saltwater flow must be stopped.

So maybe you’re asking yourself, why should I care if we lose a little dirt in the Everglades? Well, the truth of the matter is that some of the trickle-down effects of peat soil loss are still not entirely known, but they could be severe and far-reaching. Soil is the foundation of many natural habitats, providing structural support as well as nutritional benefits. The loss of soil affects the plants and wildlife that live there, as well as those living in nearby environments, including people.