UF OneWorld Event Challenges Attendees to Consider the World in 2050

By 2050, it is estimated that there will be 9.6 billion people on planet Earth. How will we sustain all of those people? How will we prevent starvation, thirst, disease, and war? How will we conserve natural resources on such a crowded planet? How will we save the world?

At the OneWorld event on March 13, which was sponsored by UF/IFAS CALS Challenge 2050 project, Syngenta, and the Bob Graham Center for Public Service, student presenters and attendees alike sought to answer these difficult questions. The “Solution Six,” as the student presenters were called, each gave a brief presentation demonstrating their solutions for various issues the world will face in 2050. Then, at lunchtime, the event leaders divided audience members into discussion groups to talk about possible solutions for various problems that plague the world currently or may affect it in the future. One phrase could be heard around the building more than others: “Think globally, act locally!”

The event encouraged audience participation throughout the program. Outside the university auditorium, a giant wall with the words “To Save the World…” invited passerby and attendees to write their solutions on the board, which ranged from simple yet powerful verbs such as “lead”, “learn” and “share” to verses from religious text. As part of his introduction, the event host, Dr. Tony Andenoro, asked the audience how they would save the world. He ran around the room with the microphone as hands went up, and attendees shared their ambitions to use education as a tool for conservation, advocate for agriculture, and maintain a positive outlook, to name a few.

The presentations that followed were dynamic, interesting proposals for solving issues related to disease, access to clean water, electricity, and modern agricultural technology, among others. The presenters were competing for a monetary prize, to be put toward making a proposed solution a reality. Casey Parker, a graduate student in Entomology and Nematology, has been working on a contraption that prevents mosquitoes (a spreader of several, often fatal diseases) from multiplying in a given area. At the end of the event, Casey was declared the winner.

Follow the link to watch the OneWorld: Challenge 2050 event. 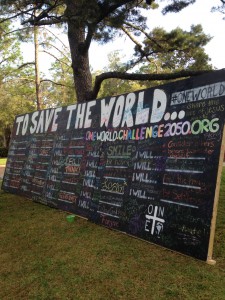 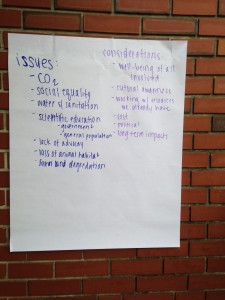 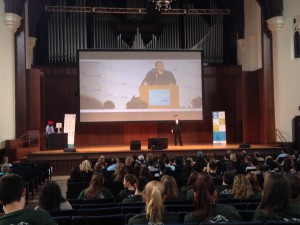