Skip Navigation or Skip to Content
Home » UF/IFAS Extension Washington County » Watermelon Harvest Is Late, But Festival Is Not !

Watermelon Harvest is Late, but Festival is Not !

Watermelon harvest is two to three weeks late in Washington County, but it’s finally around the corner. 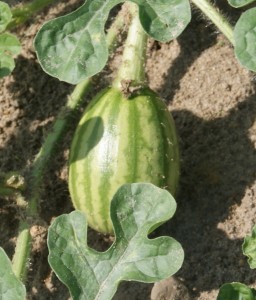 Watermelon growers in Washington, Holmes and Jackson Counties have been surveyed, with all indicating a late start to harvest. The majority have not begun harvest, as of the 26th of June. However, there will be plenty of Watermelons at the Panhandle Watermelon Festival.

This harvest delay is due to the near 100 degree temperatures in May and Early June and lack of pollinators present. Flowers have been closing early in the day due to heat, and this further reduces pollination. Since daily highs have eased off the from the 100 degree mark, pollination should improve. Watermelons are running and flowering well due to the plentiful rains during the last several weeks.

In Washington and Holmes counties, Watermelon cutting should begin sometime in early July. This condition is representative of most watermelon growers in the central panhandle.

Matthew J Orwat started his career with UF / IFAS in 2011 and is the Horticulture Extension Agent for Washington County Florida. His goal is to provide educational programming to meet the diverse needs of and provide solutions for homeowners and small farmers with ornamental, turf, fruit and vegetable gardening objectives. ...