Watering the lawn has not been on anyone’s list lately. The ample, if not excessive, rain has placed a temporary hold on this necessary task to maintain home lawns and landscapes.

It is true the weeds are enjoying the liquid bounty supplied from above. Flowerbeds and gardens have new residents peeking through the mulch and soil’s surface daily with tiny green leaves intent on staking out new territory for their species.

If monitoring their real estate holdings, the homeowner can at least witness the slow but steady progress of the uninvited plants. Sometimes, however, there are sudden surprises which stand in stark contrast to green pallet of domestic bliss.

As if by magic and seemingly overnight, the lawn is home to a collection of mushrooms. Even more startling, the fungi are arranged in a circular pattern which reflects some forethought and organization by an unknown hand. 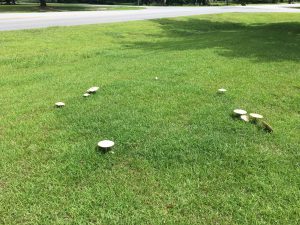 These mysteriously appearing shapes are collectively known as fairy rings and have been reported in meadows, paddocks and pastures for more than a millennium by reputable members of society. Depending on the location and culture, the name and meaning of these abrupt appearances have a variety of meanings.

During the medieval period in Western Europe the superstitious residents explained this apparent anomaly as the site of dancing fairies the previous night. Other cultures in Eastern Europe and Western Asia assigned much more sinister meanings to the toadstools and their placement.

Reality and rationality have a benign, if somewhat boring, and much less ominous explanation for this apparent enigma.

Fairy rings can be caused by multiple fungi. Among these are Chlorophyllum spp., Marasmius spp., Lepiota spp., Lycoperdon spp., and other basidiomycete fungi.

These fungi and mushrooms are categorized as one of two diverse divisions of the subkingdom Dikarya and commonly identified as the higher fungi. To the homeowner who is surprised by the sudden blemish on their lawn, the new arrivals are just a pest.

Fairy rings are most commonly seen during the summer months. It is usually during this time of year when north Florida receives the majority of its rainfall.

The mushrooms occur when large quantities of cellulose based organic matter, such as tree stumps, roots and limbs are naturally located in or have been buried under a lawn. The fungi feed on and grow supported by this material decaying in the subterranean environment.

The mushrooms, which can be all sizes and shapes, are the fruiting stages of these fungi. The species emerging is based on the spores which randomly landed there at a point in the past.

Some of the mushrooms, such as Chlorophyllum, are toxic to mammals so mushrooms should be carefully removed and destroyed if there is a potential exposure to children or pets. The use of rubber gloves is recommended when handling all unknown mushrooms.

The rings will disappear naturally overtime, but can recur if the decaying debris remains buried in the lawn. Removal of the wood based nutrient concentrations can be done, but at the sacrifice of damaging the lawn’s appearance.

While the mythical fairies may leave real surprises in the lawn, at least homeowners do not have to feel like trolls when cleaning up after the dainty sprites.

To learn more about mushrooms in Wakulla County, contact your UF/IFAS Wakulla Extension Office at 850-926-3931 or https://blogs.ifas.ufl.edu/wakullaco/