A means of survival: Mimicry

“Imitation is the sincerest of flattery,” wrote Charles Caleb Colton. Colton was a sometimes cleric, essayist, wine merchant and gambler who bounced around Europe and North America during the early nineteenth century. It is likely many of his financial lenders hoped the public would not imitate his borrowing practices.

Aside from his few literary works and the catchy phrase above, he was most noted for running up debts then leaving for parts unknown. Eye spots on a Luna Moths wings are meant to deceive potential predators into believing they are seeing another predator. Photo by Les Harrison.

Imitations are not looked upon kindly when lazy students, or journalists for that matter, complete an assignment by borrowing blocks of text. Plagiarism is a flunking and firing offense with career-ending potential.

The concepts of imitation and mimicry date back to the earliest written records of ancient Greece. The philosopher Plato used mimicry to define beauty and truth, and as a contrast to the negative aspects of life.

For the denizens of north Florida’s untamed regions, mimicry is a form of imitation which assures the survival of some. Survival always beats the alternative.

Insects are particularly effective at using several forms of mimicry to survive and reproduce in a very hostile environment where big hungry creatures always are on the prowl for their next meal. Eyes and disguise are the top tactics for continuation of the species. Multiple eyes on the bug’s face are common in the insect world. Large, eye-like spots on the rear of the bug are an effective form of defensive mimicry used by several local caterpillars species.

The saddleback caterpillar is a good example of how this deception is carried. There are two color-coordinated eye-like spots on the rump of this caterpillar. These spots are exponentially larger than the saddleback’s real eyes, which are barely visible without the aid of magnification. An approaching predator will quickly notice the blankly staring spots and likely recall the last encounter with this appropriately named creature.

It is worth noting the saddleback caterpillar has more defensive weapons systems than an Ageis missile cruiser. The novice predator that attempts to dine on this colorful, plump morsel will always remember the experience.

In addition to insects and caterpillars, some spiders have eye-spots on their thorax. Depending on the circumstances, the hunter can easily become the hunted. 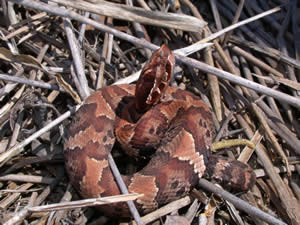 Juvenile water moccasins or cottonmouths are brightly patterned with a yellow tail tip that they wiggle mimic insects attracting small prey such as lizards, toads, and frogs. Photo courtesy of J. D. Wilson and the University of Georgia.

Another mimicry tactic is camouflage, the ability to blend into the background and avoid detection. Millions, if not billions, of dollars of hunting clothing is sold annually to provide deer and turkey hunters that perceived advantage over their potential trophy animal. Moths are quite adept at using this technique to hide in plain sight. In the wild they almost always rest or lay eggs on surfaces which closely resemble their color scheme.

The last form of mimicry occasionally seen is the lure. This method attracts the prey to its demise. A prime example is employed by young water moccasins which have a sulfur-yellow tipped tail. The tail is shaken to resemble a wounded insect as the snake hides in the leaf litter. The unwitting victim is surprised, no doubt, to discover its status as a menu item.