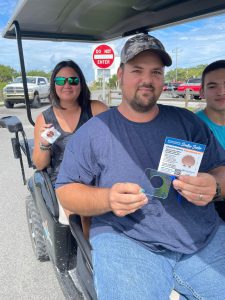 The Florida Fish and Wildlife Conservation Commission (FWC) is the agency responsible for evaluating the status of scallop populations in Florida’s Gulf of Mexico waters. FWC uses pre-season counts to estimate the size of the harvestable population. The results of recent research have shown the importance to switch from a pre-season to a post-season scallop population estimation. To understand the status of the remaining population, or spawning population, at the end of the season. This information is very valuable for fisheries management actions in the years to come. It is possible to anticipate the impact of recreational harvesting in the overall population.

FWC regulates the scallop recreational harvesting using different management strategies. An example is defining regions, season dates, gear requirements, and a bag limits. However, the size of the scallop is not a limiting factor to their harvesting. Like it is in many other recreational targeted fish species. There is no size limit in the scallop recreational fishery mainly because Florida bay scallops typically only live one year. However, with the popularity of this activity and an increase in the number of boat and harvesters, an increase in the concern about the stability of the population has also raise. As early season harvesters tend to collect higher number of scallops but in smaller sizes. The bay scallop short life span makes local populations more susceptible to periodic collapses. 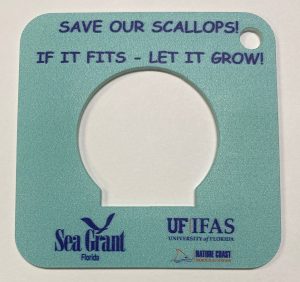 Every year, Taylor County host a ‘Scallop Seminar” before the opening date of the season, to inform and educate about the most up to date information on the scallop population, scallop habitat conservation, harvesting good practices, and safety boating. One of the good practices is related to harvesting scallops one and a half inch (1 1/2 in.) or larger. We asked 117 users “How likely are you to voluntarily adopt a good practice of “sorting” scallops under 1 1/2 inch and return them back to the ocean to help sustain scallop population?”. 84% responded “likely” and 8.7% “likely, but need more information”, to voluntarily adopt a scallop sorting practice. Then, we hosted a focus group with charter captains to discuss alternatives to sort scallops. This results in a proposal to adopt a “ring sorter” with an opening equal or bigger than 1 1/2 in. Finally, we hosted a working group with FWC scallop specialists and researcher to discuss the scallop sorter proposal. This was adopted under the premise of using 1 1/2 in. hole opening for the ring. Why 1 1/2 in? Well, in fisheries it is common to use an indicator defined as “L50”. Which means the length at which at least 50% of the population is able to reproduce. For bay scallop the L50 is 1 1/2 in. A campaign was put in place thanks to Florida Sea Grant and FWC funds to distribute scallop sorters at public boat ramps in Taylor and Hernando counties. 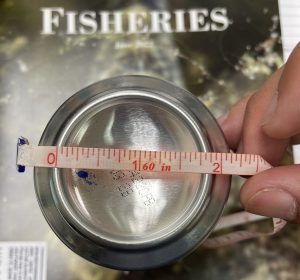 The preliminary results of the scallop sorter use are still under review, and will be shared in a different blog or other social media posts. Despite the support and the importance of the initiative to voluntarily sort scallops, some local stakeholders have shared their concerns about the ring size, which they claim must be increased to not less than 1 3/4 in, which is similar to the size of the bottom of a soda can. A scallop sorting practice they have used and promoted for some years. The results of the surveys of those who used the scallop sorter, and the input of the local stakeholder, will provide information to improve the initiative and support a healthy scallop population and a healthy economy based in the harvesting of this important coastal resource.