Traditionally the Florida Fish and Wildlife Conservation Commission (FWC) have evaluated the status of scallop populations in Florida Gulf of Mexico waters. Specially through the pre-season counts to estimate the size of the harvestable population. However, in recent years FWC have changed from a pre-season to a post-season scallop population estimation as new science. It has proved the importance of the status of the population remaining after the season closes. This is the so-called spawning population. This information is very valuable for fisheries management actions in the years to come. It is possible to anticipate the impact of recreational harvesting in the overall population. Check https://spo.nmfs.noaa.gov/sites/default/files/pdf-content/MFR/mfr713/mfr7132.pdf for more information about Bay Scallop in the Gulf of Mexico. 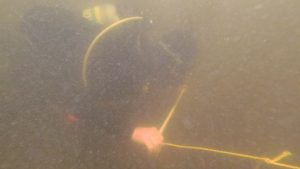 Considering the economic relevance of scallop season in Taylor County, post-season surveys were planned for 2021 and 2022 scallop seasons. In coordination with and guidance of FWC-Research Institute scallop specialists, a total of fifty sampling stations were randomly selected to be surveyed between Rocky Creek, south of Steinhatchee river in Dixie County waters, to near Fenholloway river, in Taylor County, to estimate the remaining spawning scallop population. The goal is to carry out a qualitative and quantitative analysis of the abundance of scallops in the region. This will describe the involved variables on the scalloping activity.

Three sessions for scallop post-season survey, volunteer boaters, skin divers and scuba divers, and preparation of the surveys took place by September-October 2021. Unfortunately, weather conditions, including a prolonged rainy season, the increase of runoff water from the rivers and creeks along the coast, which reduced water clarity, and therefore the visibility to search and find scallops which was reduced from 1 ft to zero visibility underwater, plus the recurrent unfavorable weather conditions, and the blooming of red tide in surrounding areas, made the scallop survey and count impossible during the short window after the season closed. Also, early fall, water and air temperatures dropped and make it unsafe to use volunteers to count scallops. 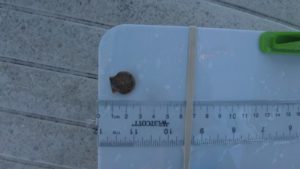 To mitigate this situation, a plan to do a pre-season scallop survey was discussed and adopted. By mid-April 2022, a group of volunteers started the survey of the 50 sampling stations. However, new adverse conditions played against the counts again. Water clarity was still low, from zero to three ft at maximum. Water temperature was still in the middle and upper 60’s degrees, which is not favorable for scallops or surveyors. Also, a thick layer of macroalgae, between 2 and 10 inches wide, was found over the seagrass at 85% of the sampling stations. This made it very difficult to search for scallops, when added to the previous described adverse conditions. Finally, scallops at this time of the year still present a small size (below 1 inch). Which is also a challenge for the surveyors. These results support the need to do pre-count evaluations to be more cost-effective in scallop population evaluation in Taylor County. These challenges are likely to remain and innovative ways to collect the data will be needed in the future.

New surveys took place late May and early June 2022, and the team found better water clarity and weather conditions to perform the counts. After a short preliminary survey, the results showed a high abundance and a patchy distribution of scallops in the area, with scallop densities over 10 scallops/200 m2.