Runoff of nutrients and pesticides is a problem that impacts many ecosystems. Improper application of these materials can have harmful effects on non-target plants and animals in aquatic systems. Citing a lack of research on pesticide runoff, a team of UF/IFAS scientists set out to examine factors influencing pesticide losses from ornamental plant production nurseries.

“Ornamental plant production is a major economic sector,” said Francisca Ordonez Hinz, a scientist in the UF/IFAS Soil and Water Sciences Department (SWSD). “In Florida, revenue from the industry is in the billions of dollars annually.”

Pesticides are a key ingredient for producing unblemished and pest-free ornamentals that are desirable by consumers. However, previous research found that pesticides may also leave ornamental plant production sites and pots via leaching and runoff water.

This study evaluated the effects of overhead irrigation/simulated rainfall intensity. It also examined formulation and application methods on pesticide losses in drainage water. Researchers used three common insecticides: acephate, bifenthrin, and imidacloprid. The pesticides were either applied as foliar sprays or directly to pots (at label rates) as liquid drenches or granules spread on the surface of the media in the pots. 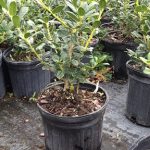 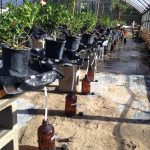 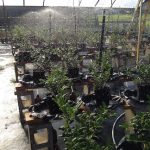 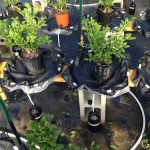 Results showed that irrigation/simulated rainfall intensity had no effects on losses of the pesticides under the conditions tested. However, concentrations in the drainage water did differ.

Most pesticide losses occurred within the first two days after the application of drenches or sprays. Granular formulations had a longer period of release, indicating a risk of loss from overirrigation during an extended period.

Wilson said, “Ecological risk screening based on the concentrations detected in runoff/leachate water indicated significant risks to aquatic organisms if enough dilution volume in retention ponds or other receiving water bodies is not available.”

“One of the challenges to reproducing ornamental plant production practices in the research setting is the lack of standardization within the industry,” added Hinz. “Growers often have differing irrigation and pest management philosophies. But despite these differences, this study points out the significant role that pesticide application methods and formulations play in influencing pesticide losses.”

Results suggest better manage or perhaps recycle drainage water within the nursery.  Wilson added, “Choices of foliar-applied pesticides would be best for reducing pesticide losses, but this is not always possible, especially if you’re trying to control soil-borne pests.  When using the pot-applied formulations care must be taken to minimize leaching from the pots for as long as possible.  These losses also make a strong case for recycling of drainage water from plant production areas to protect natural water bodies.”

The research appears in the Journal of Environmental Quality. You can read the technical report here: https://doi.org/10.1002/jeq2.20115