Since Masanori Fujimoto was a small child, he always wanted to understand things – how does this work, why does that look a certain way, how did this form? That juvenile curiosity led to a passion for answering those questions, and ultimately, his brand-new position as a Research Assistant Professor here in Soil and Water Sciences. 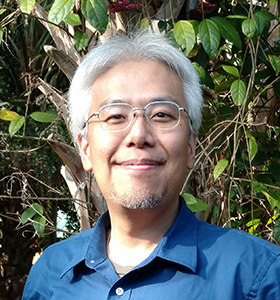 Fujimoto was born and raised in Japan. There, he was taught basic physics, statistics, chemistry, and other fundamental core subject areas that prepared him for a rigorous engineering major in his undergraduate studies.

“But thinking about application alone is not who I am,” Fujimoto said. “I craved an understanding of fundamental processes.”

Upon graduating with his Bachelor’s Degree in Japan, Fujimoto began to shift his educational focus, becoming increasingly more interested in fundamental research.

“For every issue to solve there is a practical side, but if you dig deep into what the problem is, most of the time, you encounter questions regarding fundamental processes,” Fujimoto said.

Fujimoto obtained his Master’s in Civil and Environmental Engineering and his dual PhD in Microbiology and Molecular Genetics / Ecology, Evolutionary Biology, and Behavior at Michigan State University. During his PhD program at MSU, his research was primarily focused on endangered fish species and the impact that human activities had on them.

“Almost all streams are dammed in Michigan,” Fujimoto said. “So I was looking at how Lake Sturgeon eggs were surviving in the face of the change in water temperature, water chemistry, flows, and depth in the downstream of those dams.”

Fujimoto’s focus during his post-doctoral research was primarily in microbial mediated biogeochemical cycles and aquatic invasive species that could affect those natural cycles of the Great Lakes.

“In one of my projects, I was looking at how people were transporting organisms via cargo ships and how those organisms were surviving and affecting the local ecosystems,” Fujimoto said.

It was in this research project, that Fujimoto became the first to use the ion torrent sequencing platform for the assessment of microbial community compositions and diversity during the ballast water treatment processes. Ion torrent sequencing is defined by UF Health as a type of next generation DNA sequencing that is based on the detection of hydrogen ions. It is different than other types of sequences in that no modified nucleotides or optics are used. Click here for the full definition of ion torrent sequencing.

As a pioneer in his field, Fujimoto comes to UF with a joint appointment in both the Soil and Water Sciences Department and in the Microbiology and Cell Science Department, giving Fujimoto a unique opportunity to take a look at those fundamental questions while deciphering a practical application for his answers.

This shift in human behavior can have a significant impact on our environment and the conservation of our ecosystems, which Fujimoto believes is the most important endeavor that we as humans undertake as we progress through the early 21st century.

One of his passions in leaving a positive impact in environmental conservation, is instilling that desire in his students.

“I believe the best way for them (students) to acquire knowledge is through hands on experiences,” Fujimoto said. “I’d like to mentor undergraduate students through research both in lab and in field.”

Now at UF, his primary research focus is going to be the Stormwater Treatment Areas in the Everglades.

“Nutrients coming into aquatic systems are causing algal blooms,” Fujimoto said. “These blooms can subsequently lead to the reduction of oxygen levels which kills aquatic fauna – causing a cascade of change in the food chain.”

“To minimize nutrient loading into the Everglades system, a buffer zone was created along the Northside of the Everglades, which are basically enormous constructed wetlands,” Fujimoto said.

Fujimoto plans to continue to study nutrient cycles in the Everglades, building off of his post-doctoral work in University of Michigan and monitoring, particularly, the phosphorus. “A lot of phosphorus is applied in agriculture,” Fujimoto said. “And phosphorus balance is important to the future of agriculture and ecosystem managements.”

Fujimoto will look at questions like – Where does the phosphorus go? Is it removed by plants and by microorganisms? How do algae come into play? Can we stop phosphorus from coming into the Everglades at all? Can we recover phosphorus from somewhere in treatment process?

As he delves into answering some of these questions, he also has several other research projects in mind, including:

As Fujimoto looks toward the conservation of our ecosystems, he believes that two things will contribute positively to achieving that goal:

1) Bridging the gap between scientists/academia and the general public.

We look forward to Dr. Fujimoto’s unique contributions to our department, our community, and our environment.