Can I touch a Wooly Bear Caterpillar?

For the last two weeks while teaching youth about the game of disc golf, we came across big black fuzzy looking caterpillar approximately 3″ long. Of course, the kids wanted to know what it was and could they touch it? After a quick explanation about how some “fuzzy or hairy” looking caterpillars can inject a toxin, we told them that was not true of woolly bear caterpillars.

Woolly bear caterpillars lack stinging spines and do not bite. However, the hairs can easily break off into skin when touched, which will cause pain and irritation. The stiff “hairs” (setae) of woolly bears are probably effective defenses against many invertebrate and vertebrate predators. When threatened, giant woolly bears curl up tightly to protect their vulnerable undersides. When picked up, their stiff, smooth spines are bent backward, and tend to push the caterpillars forward and out of the grip (Wagner, 2009). Because of this, it is virtually impossible to forcibly uncurl them when they are in the defensive posture. Also, in this defensive posture, their bright red intersegmental areas are highly visible and serve as a warning to repel potential predators that they are unpalatable.

Birds that feed on hairy caterpillars may also eat woolly bears including gray catbirds, American crows, rufous towhees, and brown thrashers. Some mammals, including deer mice, racoons, coyotes, striped skunks, and red foxes dine on the caterpillars. They are also the caterpillars are frequently parasitized, particularly by tachinid flies.

How do they survive winter?

Our temperatures have been colder than normal for this time of year and the kids wondered where the caterpillars went to stay warm. Woolly bear caterpillars usually crawl under bark, a rock or a fallen log to wait out the winter months. It has even been known to survive an entire winter completely frozen in a ice cube.

According to folklore, Woolly bear caterpillars- can help you forecast the coming winter weather. If their rusty band is wide, then it will be a mild winter. If the caterpillar is solid black, then the winter will be severe.

How long to they live?

Because of this the woolly bear caterpillar has the longest life cycle of any butterfly or moth. It can take up to 14 years to get from the egg to the final moth.

What does it turn into?

They woolly bear caterpillar turns into the giant leopard moth which is the largest eastern tiger moth. For more detailed information about the life cycle click here. 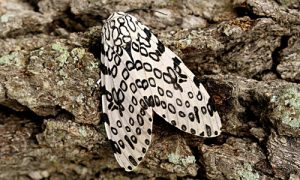