A new species of ant was recently spotted in Fort Lauderdale scurrying around the Riverland neighborhood. The yellow ant, Plagiolepsis alluaudi, is native to Madagascar but has already established invasive colonies in several other locations, including Caribbean islands, Australia, and Hawaii. Thomas Chouvenc, UF/IFAS assistant professor of urban entomology based at the Fort Lauderdale Research and Education Center, stated that the yellow ant displaced the dominant big-headed ant within 6 months, but the yellow ant may have been established for several years before detection. 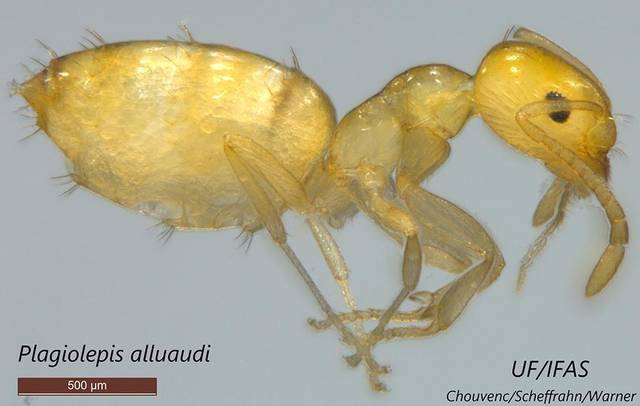 Yellow ants do not bite or sting, but the insects are so small that infestations commonly go unnoticed until the colonies reach large sizes, making them harder to eradicate. The ants have high levels of nesting systems with multiple queens that result in super colonies forming in dead branches found living trees and the soil surface. Forager ants have also been found in homes and are easily killed. However, unless the colony is found and removed, yellow forager ants find their way back into homes quickly.

In addition to being a household pest, yellow ants may impact Florida agricultural crops. Food attracts the ants, and they will cover items left on kitchen counters or left out at BBQ’s. Homeowners can manage infestations by using sweet liquid baits if they find yellow ants near or in their homes. Hurricane Irma may have contributed to the spread of the ants by dislodging debris that housed colonies. Unfortunately, very little is currently known about this invasive insect, but researches at the University of Florida are working to gather more information.

If you have any questions about yellow ants or would like more information, please contact Jane Griffin, UF/IFAS Suwannee County Livestock, Forage, and Natural Resource agent at jane.griffin@ufl.edu or 386-362-2771. UF/IFAS is an equal opportunity employer.