Tools for Moving People Out of Poverty

Several months ago, I wrote about perceptions of poverty and mentioned some programs around the country aimed at alleviating poverty. Today I want to remind readers about two existing tools that, used together, can make a huge impact in moving people out of poverty.

The EITC for Moving People Out of Poverty

The Earned Income Tax Credit (EITC) provides a federal tax credit to individuals and families who have earnings below a certain threshold. In 2016, the EITC lifted about 5.8 million people out of poverty

According to the Internal Revenue Service (IRS), to qualify for the EITC credit in 2018 a single head of household with one child can show an adjusted gross income of up to $40,320 to qualify for a maximum credit of $3,461. With no children, the income cap of $15,270 will qualify you for a maximum credit of $519. The cap on adjusted gross income for a married couple with one child filing jointly is $46,010. You can click here to see if you qualify.

You don’t have to be a parent to be eligible for the EITC. In fact, you don’t even have to be employed. Many people who qualify don’t realize that they are missing out on this tax credit because they think they didn’t make enough to need to file. Many senior citizens living on social security benefits actually don’t have to file. However, they may have made little enough to qualify for the tax credit which would lead to a refund. You can determine if you need to file your income tax report on the IRS.gov site, and find out if you might qualify for the earned income tax credit.

The CTC for Moving People Out of Poverty

You DO have to be a parent to qualify for the Child Tax Credit (CTC). In fact, your has to have to been a dependent US citizen of 16 or less in age that lived with you at least half the year. The CTC is designed to offset some of the financial expenses associated with raising a child. Recent tax code changes have increased the CTC to $2,000 per eligible child. You don’t have to show a minimum income to qualify for the CTC. 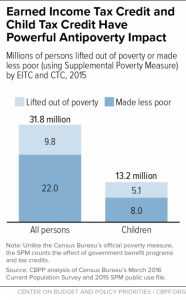 What is the Impact of These Credits?

These two refundable tax credits combined are credited with moving 19.3 million U.S. citizens out of poverty in 2016. That is a really positive statistic, but we can do better. The IRS estimates that almost 18% of eligible taxpayers don’t claim the credits they have earned. In 2016, Floridians left an estimated $1.1B in EITC credits unclaimed. In St. Lucie County where I work, the IRS believes that more than 6,500 citizens left $16.7 million dollars unclaimed. Can you imagine the impact that that amount of money annually could have on our local economy? Think of the impact on the lives of those 6,500 people who missed out on an average of $2,500 each?

Tax credits reduce tax liability, allowing people to keep more of their income. Tax credits are an effective tool for moving people out of poverty. You may earn a refundable tax credit even if you end up with no tax liability at all. Simply put, don’t leave money on the table! Realize it isn’t just money that you may be losing out on. Studies show that the EITC and CTC not only reward work and reduce poverty but research shows they help families at every stage of life. Benefits from EITC and CTC are linked to improvements in infant health, better school performance, greater college enrollment and increased work and earnings in the next generation. With so much to gain and so little to lose, don’t let this years tax credits go unclaimed!

Carol Roberts is a Community Resource Development Extension Agent working in St. Lucie County, Florida. She graduated from UF CALS in 2004 and is currently earning her M.S. degree in Extension Education. ...