Here in the Tri-County Agricultural Area (TCAA; St. Johns, Putnam and Flagler Counties) we approximately 14,000 acres of spring harvested potatoes. Large amounts of cull potatoes are discarded and like many other culled vegetables, are fed to cattle at harvest. Building on pilot data collected in 2017, a field demonstration was conducted that involved ensiling low-quality bahiagrass hay and spring harvested cull potatoes to develop a feed resource that could potentially be used to meet the nutritional requirements of cattle during the winter months.

In May 2018, twenty-three thousand pounds of silage was prepared using a mixture of 70% potato and 30% low quality Bahia grass hay to determine if a value-added product could be developed. 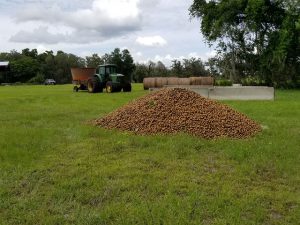 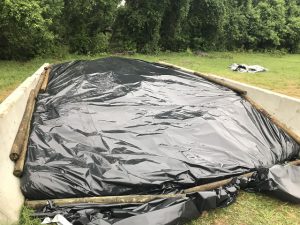 Hay and potato samples were tested independently of each other to determine the nutritional value of each feedstuff used at ensiling. Results, on DM basis, for bahiagrass hay was 6.5% CP and 49% TDN and cull potatoes was 11.5% CP and 82% TDN prior to ensiling. Silage samples were taken in September 2018 (120-days after ensiling) and tested for nutrient composition and mycotoxins. Some mycotoxins were detected but were well below acceptable thresholds. The finished potato silage feed tested 8.55% CP and 53.75% TDN. Compared to hay alone, the silage resulted in an increase of 2.05% in CP and an 4.75% increase in TDN.

In March 2019, 10 feeder steers were weighed (600 lb. avg.) and placed in a dry-lot and fed a combination of approximately 40 lbs. of potato silage and 5 lbs. of dried distillers grain/hd/day for approximately 24-days. Cattle gained 1.435 lbs./hd/day for the feeding period. An economic analysis was conducted, and it was determined the cost of gain for this feedstuff, using industry standards, was $1.46/lb. Compared to other feedstuffs, cost of gain would need to be between $0.50 to $0.70/lb. to be competitive.

Although this feedstuff does not meet all the nutritional needs for cattle during the winter months and its cost of gain is higher than other by-products, it does provide an improvement compared to bahiagrass hay when fed alone.

Following these results, potato silage was again prepared in May of 2019 using higher quality Bahia grass and simplified procedures. Samples have been taken and data is being evaluated to determine feeding goals for our upcoming winter-feeding strategies.

To learn more about this topic, contact the St. Johns County Production Ag Agent, Tim Wilson at 904-209-0430 or timwilson@ufl.edu.