Call it a beetle to battle the bulbil. 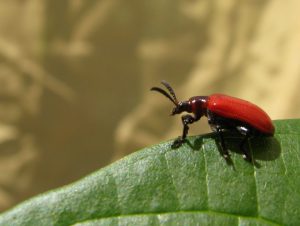 The tiny air potato beetle (Lilioceris cheni) might be the key to stemming the invasion of a “noxious weed” – the air potato plant – that can overrun Florida’s natural ecosystems, and you can help the beetles get a good foothold.

Simply: be on the lookout for the little warriors, and tread lightly where they live.

That’s because at every stage of their lives, beetles decimate air potatoes. Females deposit their eggs on the underside of the large leaves, and larvae and adults alike make their home on the plant, feeding on the plant leaves or potato-like tubers, known as “bulbils.”

The beetle cannot survive without the air potato, in fact. Fifteen years of extensive research by scientists with the University of Florida Institute of Food and Agricultural Sciences and the U.S. Department of Agriculture has shown that.

That’s a welcome change from Florida’s long history of unwelcome invaders. Florida’s lists of non-native invaders actually extend to more than 500 fish and wildlife species, and a staggering 1,180 plant species.

Including the air potato (Dioscorea bulbifera). It is non-native, meaning it is not a part of Florida’s natural ecosystem, and it also is considered invasive, having spread beyond a local area.

Originally from Asia and tropical Africa, the air potato is a climbing vine with large, glossy, heart-shaped leaves. A member of the yam family, air potato plants in Florida reproduce almost exclusively through the production of aerial bulbils throughout late summer and early fall. As the vines die back during the winter dry season, the tubers drop to the ground to wait for the warm rains of spring to bring them out of dormancy.

This vine is capable of covering large areas of land in a short amount of time, eventually blocking sunlight and killing the plants that it covers. It is most commonly found in disturbed areas, and can be seen in many yards in urban neighborhoods. And it can take as little as a few months of derelict maintenance for the air potato vine to completely cover a backyard.

Some of the most common management methods are: pulling the vines, digging up the bulbils, and cutting the vines off at the ground while spraying what remains with herbicide. Most of these methods will work only with consistent follow-up.

But a biological control is only good if it doesn’t itself become an invader. The air potato beetle has been thoroughly researched, in that regard, including isolating the beetle with a variety of potential food sources to determine danger to native plant populations. That research showed conclusively that air potato beetles only eat air potato; without it, they die. 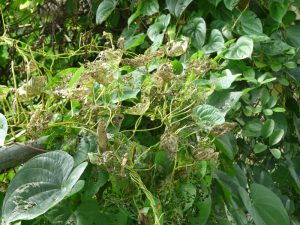 Let the air potato beetles do their good work munching on these horrible invasive plants. The beetles will leave the area when no air potato is present for them to eat.

If you are curious about identifying a beetle that you have found on air potato or you have noticed ‘skeletonized’ leaves you can contact the Master Gardener Plant Clinic at the local UF/IFAS Extension Sarasota County office at 941-861-9807 or send an email and photo to plantclinic@scgov.net for more information.

Kevin is the communications and marketing coordinator at UF/IFAS Extension Sarasota County. He joined the County in 2015, having previously worked as a reporter for newspapers in Florida and Illinois, largely writing about ecological and scientific issues, and as an environmental consultant prior to that. ...