An ounce of prevention: scale insects

So you may or may not know what a Tuliptree looks like but this conversation is actually not about Tuliptrees; rather, it’s about a scale insect that loves to feed on all the relatives of the Tuliptree, including the elegant and exquisite Magnolia. Unless there is a heavy infestation, tuliptree scale also known as Toumeyella liriodendra, can be hard to spot on magnolia trees because the insects tend to reside on the underside of the leaves. A heavy infestation however, is hard to ignore – the leaves may appear shiny, coated with a sticky substance called honeydew, and/or coated with a black substance resembling soot, which is actually a fungus called sooty mold. 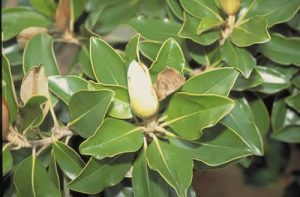 What’s more, even if insecticides are applied to control the tuliptree scale, the dead insects remain on the plant tissue after treatment and so unless the scale debris is removed, it is difficult to tell whether effective control has been achieved.

Additionally, timing of insecticidal applications is important because there are some contact insecticides which may only be effective on the immature stage of the scale, known as crawlers. For these reasons, controlling scale insects can be very challenging.

It is therefore crucial to try to nip a scale insect infestation in the bud (pun intended) by avoiding plant stressors including over-pruning, over-watering etc., and doing periodic pest scouting, being on the lookout for new pest infestations on the underside of leaves and on new growth.