The importance of Florida wetlands

Sarasota County has declared May as Wetlands Month to highlight the importance of wetlands in Sarasota County. Wetlands provide many benefits. Chief among these are wetlands’ ability to filter impurities from water, store water to reduce flooding, keep carbon to reduce carbon dioxide emissions, and provide habitat for many precious plant and wildlife species of Florida. Wetlands are also tied to our groundwater system making their existence and health important to drinking water and springs. Wetlands offer many recreational and cultural opportunities. Yet, despite all these benefits, more than half of the original wetland area in Florida has been drained, dredged and/or filled for development; with the vast majority being for residential and commercial development.

Before Florida became a State in 1845, there were an estimated 20.3 million acres (8 .2 million ha) of wetlands, which is the equivalent of a little less than 4 New Jersey-sized states. Most of those wetlands persisted for the first 100 years of Florida’s statehood. Even as late as the 1940s, Florida was still the least populated state in the South because of the lack of air conditioning. Most of the wetland area in Florida north of Miami were drained, dredged, and/or filled between 1960 and 1996.

Wetlands are vital to the health of our environment. They perform the same function for our landscape as kidneys do for our bodies, in that they filter and remove pollutants. Wetlands filter out 90% of the most common pollutants such as nutrients out of moving waters. Wetlands do this by slowing down water, allowing suspended materials carried in the water to drop out and become trapped by plants and/or soils. Similarly, dissolved constituents can be taken up by plants or combined in the soil. These filtering services help keep Florida waters fishable and swimmable. Thus, the destruction of wetlands may have contributed to the degradation of Florida waters. There are 1000s of impaired water segments in Florida and 33 in Sarasota County (see list). A water body designated as impaired generally means that it does not meet its designated use as a fishable and swimmable water. Not only do wetlands help to keep waters healthy for fish, but are also important to approximately 75 species of mammals, 283 species of birds, 122 reptiles, and 57 amphibians (Millsap et al. 1990).

Wetlands are the Kidneys of Our Landscape 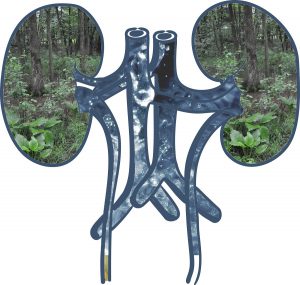 Wetlands are in fact the purveyors of health and well-being and are often referred to as the kidneys of our landscape. Since we have lost over half of our total wetland area then we are operating off of one kidney in Florida. Unfortunately, our kidney has been severely compromised because it is failing to keep up with its ever growing body, which in this case is human development of the landscape.

If it was your body, what would you do if you had a failing kidney? Likely you would limit the number of contaminants entering your body. Similarly, we need to limit the amount of contaminants leaving our land and entering our waters. Abide by UF/IFAS Extension recommendations for fertilizers and pesticides. Second, we could also sure up the functionality of our kidney by devoting a portion of our yard and/or neighborhood to create mini-wetlands that work to slow the rain water leaving our yards, driveways, and streets. These mini-wetlands can filter the pollutants before moving downstream to lakes, ponds, stream, canals, or bays. These mini-wetlands are known as rain gardens, bioswales, and lake or pond littoral zones. To learn more about planting Florida wetland plants in your neighborhood or to learn more about fertilizer and pesticide recommendations contact your local UF/IFAS Extension office.

Dr. Abbey is the Water Resources Agent for UF/IFAS Extension & Sustainability Sarasota County. She received a Ph.D. in Geography from Penn State where her research focused on quantifying the changes to wetland hydropatterns as a result of human disturbance. ...