The UF/IFAS Hastings Agriculture Extension Center (HAEC) accomplished a challenging feat and grew sweet corn during this wet fall weather. Two phases (0.84 acres each) of 8 different commercial varieties of sweet corn were planted on August 31 and September 22, 2020 at the Hastings Research Farm on Cowpen Branch Road. The harvest yields were much smaller than the Spring variety trials planted last March, however, the taste was just as tender and sweet. The variety trial had four replications, which means that there are four subplots arranged randomly in the same field that contain the same variety. Since we had 8 varieties that means there are a total of 32 subplots from which we collected data. This approach provides statistical soundness to our study. The variability caused by slight changes in soil texture, moisture, infestations of pests such as corn earworm or nematodes, are accounted for by reporting average values from all four subplots. This way we can determine if there are true differences among varieties of sweet corn rather than just inherent differences that may occur due to the placement in the field. For example, the outer rows in our field were influenced by thieves in the night (i.e. raccoons) that helped themselves to our sweet corn. Incorporating three or four replications in our research trials helps to remove these biases. 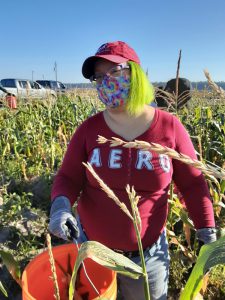 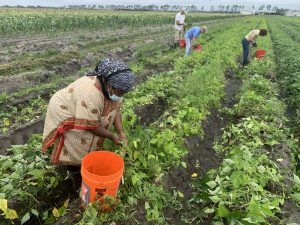 and share with local growers that are interested in growing new varieties of sweet corn. More importantly, we were able to share the majority of our harvest with food banks that serve hungry community members. The Society of St. Andrew brought a couple dozen volunteers out to our Hastings farm and harvested the bulk of both phases of our sweet corn trial and some left over green beans. Their mission is to “harvest and share healthy food, reduce food waste and build caring communities by offering nourishment to hungry neighbors” https://endhunger.org/ Gleaning farm fields (i.e. picking any remaining vegetables after the commercial harvest) is one of their top priorities to prevent food waste and provide healthy alternatives to those that lack access or resources to buy fresh produce. This year has been especially challenging and food banks have been overwhelmed with the demand for produce handouts. St. Andrew’s volunteers came out for both harvests and gleaned approximately 3000 pounds of sweet corn and a couple bushels of green beans for the community. 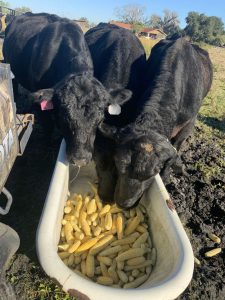 For grading purposes, a certain portion of the corn had to be shucked, measured with a ruler and inspected for worm damage. After calculating the percentage of “Fancy” grade for each variety, we were left with a couple hundred pounds that went directly to Double C Ranch in Flagler County. Even the research corn was put to good use! The cows are used to eating field corn,

but they took quite a liking to the sweet corn though it was still on the cob. Five of our top performing varieties were also harvested by Wesley Wells Farms for their “Santa on the Farm Day.” Five varieties were collected by Wesley’s elves (all six children) including Affection, Yellowstone, Sovereign, BSS-1075, and Obsession. Over 250 folks visited their farm on December 12th to hang out with Southern Santa and his tractors, participate in the candy cane ring toss and eat some sweet corn. Sweet corn tasting was big hit and the overwhelming winner of the five varieties was ‘Affection’ which is produced by Seminis. We know that Santa has a sweet tooth, and I think he enjoyed the corn even more than the cookie booth! It’s not available in the North Pole, so hopefully Santa will make an early stop in Hastings every December to gear up for his long Christmas Eve journey.