If you are passing by one of the local potato farms, you may notice potatoes rolling off the harvesters and filling the tractor-driven wagons. I stand in awe as I watch a four-row mechanical harvester dig approximately 20,000 pounds of potatoes in about 15 minutes. It’s a beautiful end to a 90 to 110-day season of hard work in the field. 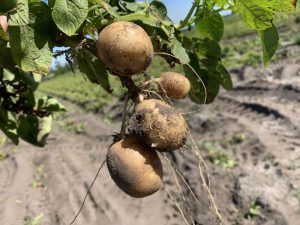 Check out the cool youtube video of commercial harvesting of chip potatoes in Putnam County – https://www.youtube.com/watch?v=aju0vgnmUdI Amidst the COVID-19 situation, potatoes remain in high demand since they store well and compliment any dinner meal or serve as a much needed snack as we reservedly turn on the TV and watch the news of the day. In Putnam County, growers produce both tablestock and chipping potatoes. Common tablestock varieties sold as fresh market produce include Red LaSodas, Yukon Golds, and Russet Norkotah that are typically prepared by boiling, mashing or baking. Vines are dessicated (sprayed and killed) approximately two weeks before harvesting tablestock varieties to give the skins a chance to “set” or harden up. This added skin protection helps prevent bruising during harvest and post-harvest handling. Chipping varieties, such as Atlantic, are selected based on their ability to produce crisp, light-colored chips upon frying, and they are sold specifically to potato chip processors. 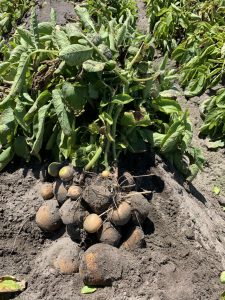 Vines are not dessicated, but remain green until harvest since bruising or skin damage is not a major concern for chip processors.

Specific gravity (SG) is an important quality criterion that can be measured during post-harvest grading and evaluation. SG is an estimate of dry matter content, which is a function of how much water is present within the potato flesh. The higher the SG, the higher the dry matter content (which means lower water content). For example, a potato with an SG of 1.100 correlates to an estimated dry matter content of 24.4% (which means there is only 75.6% water content in the potato flesh). SG typically varies from 1.060 (16% dry matter) to 1.100 (24% dry matter) depending on the potato variety. This measurable quality parameter is helpful in deciding optimal preparation techniques. Red-skinned potatoes, for example, have relatively low SG (higher water content) and they hold their shape while boiling so they are great for making hash browns and potato salad. 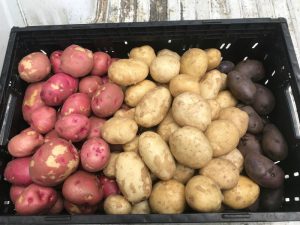 Russet-type potatoes have a higher SG (lower water content) and they make a very fluffy baked potato but may fall apart when boiling.

So make sure you pay special attention when you are buying certain types of potatoes at the grocery store, and most importantly, ask the produce manager to stock local potatoes grown in Florida. “Fresh from Florida” is the logo from the Florida Department of Agriculture and Consumer Services and so anything with this label has been produced in Florida. During the COVID-19 situation, certain grocery chains have taken a more proactive role in stocking produce from Florida. However, if consumers put pressure on their grocery chains, we hope for this to continue even when COVID becomes a memory.

Variety trials on different potato varieties are currently being harvested at the UF/IFAS Hastings Agriculture Extension Facility. Due to the COVID-19 situation, additional hired help was not permitted at the facility for this year’s potato harvest. Despite the skeleton crew, data is being collected and research is continuing at the farm to ensure our farmers are provided with the most up-to-date research on potato varieties that provide excellent yield and quality. The UF/IFAS Hastings crew led by Scott Chambers assures that our local community needs are met by providing excess produce to food banks and specialty groups such as the Rodeheaver’s Boys Ranch.