Unlike many people, I am always happy to see (or smell!) brown Sargassum seaweed washing up on local beaches. While we do not have kelp in Florida waters, Sargassum is similar in that it contains gas-filled bladders that keep the seaweed afloat in the ocean. In fact, some species of Sargassum do not need to attach to the sea floor at all—they can exist solely as a floating seaweed. Seaweeds are algae. While algae photosynthesize, they are not true plants. They do not have roots or flowers. They may have holdfasts, which can look like roots. However, holdfasts are simply a way that the alga attaches itself to a surface or in the sediment. While they can reproduce by releasing eggs and sperm, algae do not produce flowers.

Floating Sargassum seaweed grows primarily in the Sargasso Sea, in the central part of the North Atlantic Ocean. Sustained east or northeast winds can blow seaweed across the Gulf Stream and onto Florida’s Atlantic coast beaches. So why do I like to see seaweed on the beach? The seaweed brings with it whatever has become trapped in it or has been living in it. This can provide an opportunity to see some really interesting items. These can include floating seeds of various types and from various locations.

The floating seeds are often referred to as sea beans. They range in size from less than a quarter of an inch in size (e.g. moonflower seeds) to a foot or more (large coconuts). They all grow on terrestrial plants (ranging from vines to shrubs to trees). When they fall from the plant, they get washed into rivers or directly into the ocean. Here they can become swept up in ocean currents, and may spend many years traveling around the ocean before becoming blown ashore.

Some animals including small sea slugs, shrimps and frogfish are unique to the Sargassum. They are camouflaged to blend in with the golden-brown colors of the seaweed.

Not everything that washes in with the seaweed is harmless. Portuguese man-o-war, along with their related community of organisms, often accompany the Sargassum. People should be careful when handling seaweed if man-o-war are present, as the detached tentacles from these jellyfish relatives can be very painful. Unfortunately, floating trash, including lots of plastics, often also accompanies the seaweed to shore. 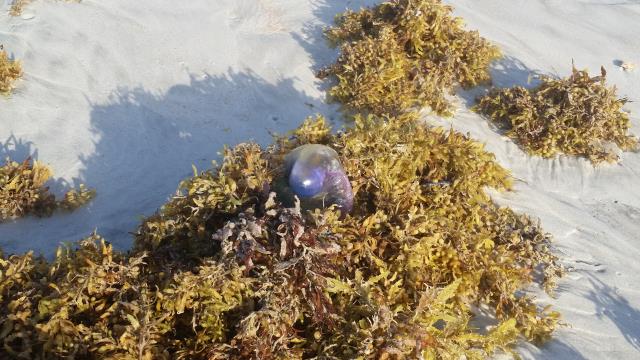 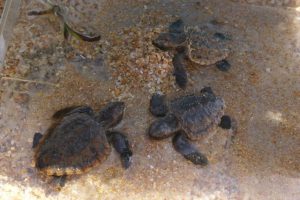 Hatchling sea turtles may also be returned to beaches with large mats of Sargassum. This is because those young turtles spend their first years using the seaweed as both a floating home and a location to find food. Unfortunately we are learning that these young turtles are eating large amounts of very small plastic pieces, even in their first few months of life. People finding a washback sea turtle should not return it to the ocean. Instead, they should contact the Florida Fish and Wildlife Conservation Commission at 888-404-3922.

Sargassum seaweed (and other plant-based debris) on the beach is referred to as wrack. The wrack plays an important role on the beach, as it is the main source of nutrients for beach plants. As the wrack decays, it acts as a fertilizer both for those plants already growing on the beach and for the seeds contained within the wrack or coming from local beach plants. It is not uncommon to find a new line of plants growing where seaweed has washed up on the beach and been buried in the sand. These plants can help trap additional sand and, ultimately, form new dunes.