An alternative crop that some growers are planting in light of the diminishing potato chip contracts in the Tri-County Agriculture Area (TCAA) is cauliflower. Cauliflower is a cole crop in the Brassica oleraceae family, which also includes cabbage, broccoli, collards and kale. According to Dr. Noia, cauliflower is one of the powerhouse fruits and vegetables, which are foods that are strongly associated with reduced chronic disease risk https://www.cdc.gov/pcd/issues/2014/13_0390.htm. They pack lots of nutrition in a densely-structured head of white curds. From a food systems approach, it is essential that we begin to focus on maximizing nutritional outputs from agricultural lands. Growing healthier foods is the primary approach for battling malnutrition around the world. It’s no longer good enough to feed the hungry, but we must nourish the globe with well-balanced nutritional diets originating in our soils.

The UF/IFAS Hastings Research Farm on Cowpen Branch Road is finishing up a variety trial on seven different varieties of cauliflower. Seeds for the trial were provided by Bejo Seeds, Inc. from St. Petersburg, Florida. The varieties include Alcala, Flamenco, Adona, Segovia, Bermeo, Benissa, and Amazing. The first round of transplants were planted on December 5, 2017 with a plant density spacing of 18” apart within the rows. A pre-plant fertilizer (100 lb N, 43 lb P2O5, and 100 lb K2O on a per acre basis) was used for plant initiation and additional fertilizer was added through fertigation. Upon head formation, the leaves are wrapped with a rubber band around the head to prevent exposure to the sun. This practice is known as blanching and it maintains quality, tenderness, and a pure “virgin” white head. 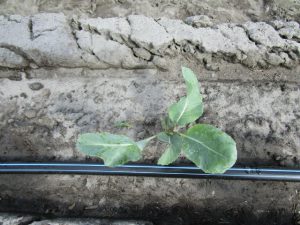 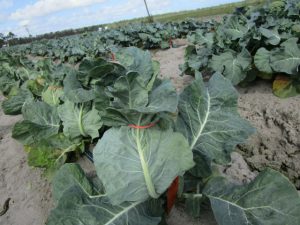 The size and the quality of the heads for each variety were compared on February 23, 2018 (80 days after transplanting (DAT)), and the heads for each variety are shown below. Most of the varieties showed some evidence of ricing, which is when the curds enlarge and take on the appearance of boiled rice. According to Masarirambi et al. (2011), ricing can be a result of heavy nitrogen side-dressings http://www.academicjournals.org/journal/AJPS/article-abstract/D6A2DF22431.

Other growers in the TCAA are already planting cauliflower as a replacement for their former potato crops. Tommy Burrell has been growing cauliflower for the past few years and he has increased his acreage to 600 this year. His variety of choice is Flamenco and he markets his crop all the way up the East Coast into Canada, and he also sells his product to some big names like Winn Dixie and Walmart here in the Southeast. Matt Seay is another grower in the TCAA that has added approximately 200 acres of cauliflower to his crop diversification plan. The crop harvest is done using an efficient combination of laborers and a mule train. The labors cut the head from the stalk, remove the outer leaves and toss the head up to the mule train, where the heads are rinsed and packaged in the field. Contact Gary England with the UF/IFAS Hastings Agriculture Extension Center if you are interested in coming out to see the ongoing variety trials. 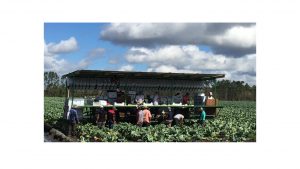