White clover is a cool season legume that adds a high-protein supplement to common pasture grasses such as Bahia and Bermuda grasses. White clover is a very nutritious supplement for livestock since it contains 15% protein (on a dry matter basis) and has approximately 70% digestibility, according to UF specialists (see the EDIS document “White Clover” for more information see http://edis.ifas.ufl.edu/aa198 ). For establishment, white clover should be planted on a clean-tilled seedbed in the fall, typically from mid-October through mid-November. It prefers wetter ground and survives as an annual in pastures with clay or loamy soils that have high moisture retaining capacity. Soil sampling is recommended prior to planting any type of cool season forage to establish proper soil pH and fertilization requirements. Some nitrogen can be helpful in the establishment phase, however, phosphorus and potassium are the major nutrients required to maintain a healthy stand of white clover. Once established, white clover spreads by stolons and can tolerate close grazing.

One of the unique characteristics of white clover is that it is legume rather than a grass. Commonly known grain legumes include peanuts, soybeans and cowpeas. Traditional forage legumes include alfalfa, crownvetch, and other types of clover such as red, crimson, sweetclover. Legumes contain bacteria that have the ability to generate their own source of nitrogen through a biological process known as nitrogen fixation. Legumes form nodules in their root system, which contain specialized aerobic bacteria (aka nitrogen-fixing bacteria) that convert atmospheric nitrogen (N2) into a plant-friendly available form of nitrogen (NH3). Although this conversion process is an anaerobic reaction, which occurs in the absence of oxygen, the bacteria are aerobic and thus require oxygen. As nodules mature and the microbial community become active, the nodules enlarge and gradually turn a reddish color that is representative of the “leghemoglobin” that provides oxygen flow to the bacteria. Thus, leghemoglobin is what allows an anaerobic reaction to be performed by aerobic bacteria in the nitrogen fixation process. In addition to the protein benefit provide by legumes, they recycle atmospheric nitrogen biologically and ultimately reduce the need for commercial fertilizers. 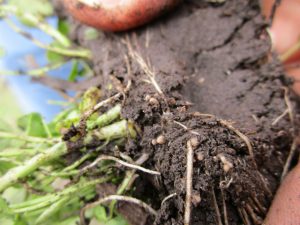 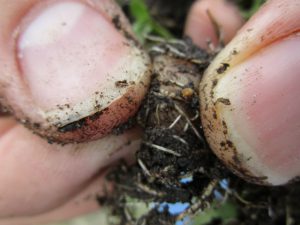 Dr. Marcelo Wallau http://agronomy.ifas.ufl.edu/faculty/marcelo-wallau/ is one of the newest members of the University of Florida Agronomy Department and he specializes in livestock forages. Dr. Wallau recently visited a third-generation ranch in Flagler County, owned and operated by Chuck Cowart. He was impressed with the old stands of white clover that have persisted through the years with very little attention. The UF/IFAS Agriculture Extension Agents and Specialists work together with stakeholders to improve forage management strategies with an overall goal of improving livestock health and promoting economic sustainability among livestock owners.