Volunteers engage in a “BioBlitz” at Se7en Wetlands Park!

Approximately 12 volunteers and 10 community partners joined together at Se7en Wetlands Park to inventory the area’s plants, insects, and wildlife on Thursday, November 15, 2018 during the park’s first ever BioBlitz event. Participants used the iNaturalist app to catalog species seen during the event, after a short introduction to the inaturalist application by Se7en Wetlands’ Environmental Program Specialist Julie Vogel.

What is Se7en Wetlands Park? 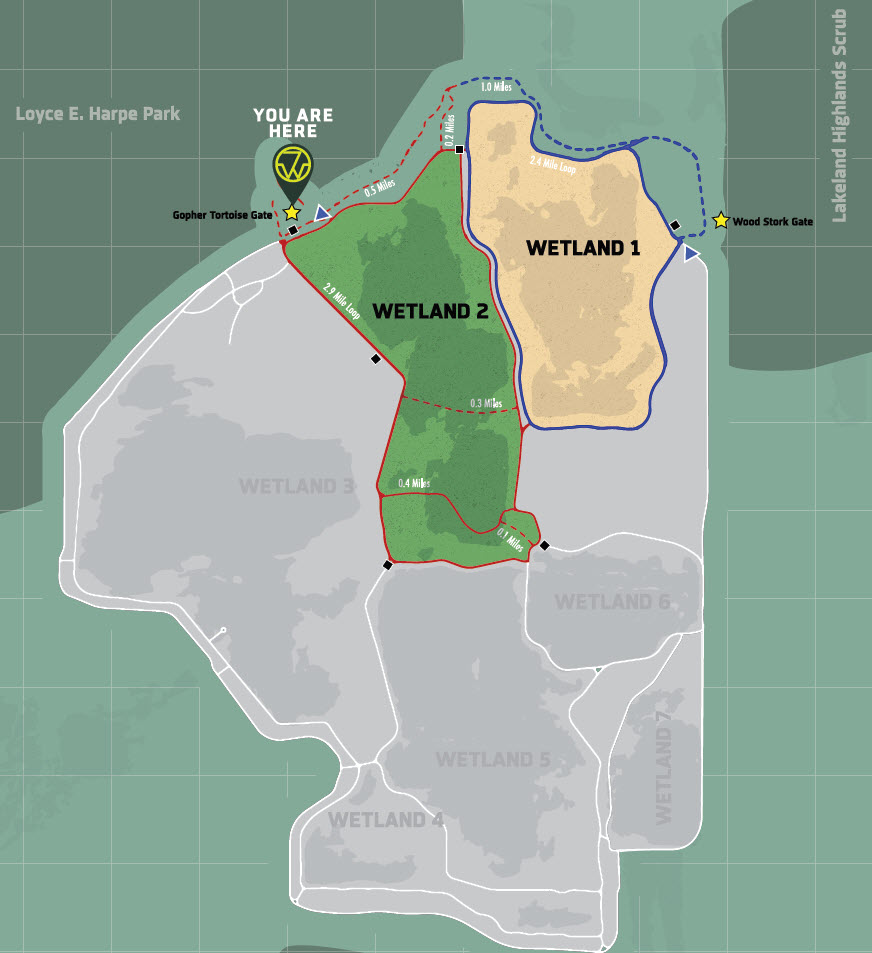 Se7en Wetlands was once part of the Bonny Lake Mine, a phosphate mining operation that began in 1947. Part of the site was later used as phosphate clay settling ponds. The mine was closed in 1984 and a few years later, the property was purchased by the City of Lakeland to use as a Constructed Wetland Treatment System. Changes and upgrades to the site included changes to berm elevations and slopes, the installation of water control structures and pipes, and the planting of wetland and upland vegetation.

In 2018, Se7en Wetlands was opened to the public and became a new City of Lakeland park. Currently, the berm around two of the seven treatment wetlands are open to the public. There are two Public Entrances to Se7en Wetlands: Gopher Tortoise Gate (drive through Loyce E. Harpe Park) & Wood Stork Gate (walk through Lakeland Highlands Scrub Reserve).

Learn more about Se7en Wetlands Park at their website: https://www.lakelandgov.net/departments/water-utilities/se7en-wetlands/

What is a BioBlitz?

According to the iNaturalist website, “a bioblitz is a communal citizen-science effort to record as many species within a designated location and time period as possible.”

What did the volunteers see during the bioblitz?

In total, volunteers recorded an amazing 116 observations during the event on November 15. Participants reported:

According to Julie Vogel, Environmental Program Specialist at Se7en Wetlands Park, “This was a great first BioBlitz for Se7en Wetlands park and I am so excited to host more of them.”

Subject matter experts led their volunteers on 1.5 mile pre-planned hikes through the public area of Se7en Wetlands Park. These routes were mapped out, by Mrs. Vogel, to ensure volunteer observers covered as much ground as possible within the two-hour event.

How can I get involved?

Anyone can use the iNaturalist app and website to help catalog plant and wildlife species in their area! All you need to do is create an account. You can upload images from your computer, taken with any camera. The program will ask you for the location and the date of the photo, when it was captured. Remember, the most important part of an iNaturalist observation is a clear photo. This will help the inaturalist community confirm or suggest species identifications.

The best part about the inaturalist program is that participants do not need to be plant or wildlife scientists to participate! If you do not know the species, you can still upload your observation, with or without an educated guess. The inaturalist community can provide their best guess to the identity of the species you uploaded, and with time, a research-grade identification can be verified.

or the iPhone app here:

. If using the smartphone apps, you can take photos and geotag them, right there, as the observation happens!