Skip Navigation or Skip to Content
Home » UF/IFAS Extension Pinellas County » That Is The Largest Spider I Have Ever Seen!

That Is The Largest Spider I Have Ever Seen! 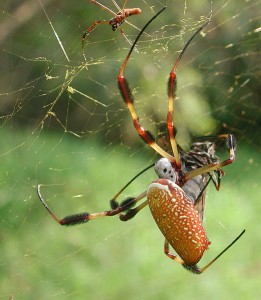 Commonly known across Florida and other southeastern states as the Banana Spider, the Golden Silk Orbweaver (Nephila clavipes) is known for being one of the largest non-tarantula spiders in North America; females ranging from 24mm to 40mm or between an inch and an inch and a half. They have an orange and brown body with black feathery tufts on its legs. The webs can reach over 1m (3 feet) in diameter in forest clearings and often stretch across trails.

Some people have had an experience with the Orbweaver. Hikers and hunters are weary of them, as to not walk through their webs especially during later summer and fall when the females spin their webs. Despite their intimidating size and colors, they are not particularly dangerous to humans; they are not venomous and will only bite if they are pinched or held. Even then, their bite is less severe than a bee sting. The Golden Silk Orbweavers have even been found to be edible, reported to taste like raw potatoes and lettuce or peanut butter with a sticky consistency, although we certainly don’t recommend a taste test.

Males are distinctly different from females. They are less noticeable, just around 5-8mm or about a ¼ of an inch in diameter, and their body is brown. Males can be found sitting around the female just before the female is ready to mate. Males are seen from July to September, waiting for the females to mature around August and lasting late into the fall. Often multiple male spiders can be found on one web; they fight each other to be able to mate, some even losing their legs in the battle.

The females produce at least two egg sacks after mating. Containing hundreds of eggs, the sacks are 2.5-3mm or about 1/10th of an inch in diameter and covered in thick golden silk. If you are not a fan of spiders, be thankful you don’t live in a more tropical region where the Golden Silk Orbweaver produces around nine egg sacks!

It is the only species of its genus that lives in the western hemisphere. Nephila clavipes is found from Florida, across the gulf, up to North Carolina, into the West Indies and down to South America (as far as Argentina). Other relatives are found in Madagascar, the South Pacific, and Southeast Asia; these have been known to be much larger.

Although named for the color of its web, it is the placement of the web that matters. It is located to take advantage of the flight paths of insects. The webs are mostly found at the edges of forest clearings, alongside forest trails, across forest watercourses, and sometimes between utility lines. If the web is destroyed, it is not recreated, but rather repaired where needed. The large webs may also be home to kleptoparasites or organisms that steal food. In the case of the Golden Silk Orbweavers, their unwanted guests are silvery dewdrop spiders (Argyrodes spp.), about 3-4mm or about 1/10th of an inch in diameter. They stay on the outer edges of web and wait until the Orbweaver leaves its prey unattended to take it.

You can observe spiders year round in Florida, but the autumn is an especially good time to see these remarkable creatures. The slanting sun rays of early morning and early evening present a prime time to photograph the golden silk of these beautiful webs. Remember to keep a respectful distance and never intentionally disturb a spider’s web. Spiders of all shapes and sizes play an important ecological role in Florida’s natural and developed areas.