Biofuels are Growing in Florida 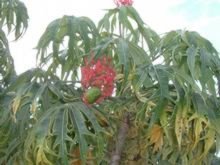 Everyone is talking about the price of gas. Developing alternative sources of fuel to power our cars and trucks is of great interest with gas prices soaring and carbon dioxide emissions contributing to climate change. Biofuels are renewable liquid fuels made from plant matter rather than fossil fuels. Biofuels can help reduce air pollution, greenhouse gases, and dependence on imported oil.
There are two types of biofuels that are currently taking center stage in the push for alternative fuels – ethanol and biodeisel. Ethanol and biodiesel are completely different. Ethanol is a product of fermentation, and biodiesel is chemically-converted fat or plant oil. Currently, the biggest source of biofuel is ethanol — a liquid distilled from corn or other starchy crops. Flexible fuel vehicles (FFVs) are designed to run on gasoline or a blend of up to 85% ethanol (E85). The use of waste from Florida crops such as sugarcane and wood (cellulosic ethanol), may provide the most practical and efficient source of biofuels.
Biodiesel is made from sources such as vegetable oils and can be blended with diesel made from petroleum. When the first diesel engines came along at the end of the 19th century, they were originally designed to run on vegetable oil. Biodeisel can be produced from crops such as soybean or Jatropha. Jatropha curcus or Physic Nut, is a drought-resistant perennial, growing well in marginal or poor Florida soils. It is easy to establish and plants produce seeds with an oil content of 37%. Another source of biofuels is used cooking oils. Since 2002, Pinellas County has been using biodeisel purchased from a company that recycles restaurant grease waste into biodeisel. Algae have also been reported as a source for biodeisel. Unlike some biofuel sources which require crops to be specially grown, which use more land, fuel, chemicals and fertilizers, the algae already exist. To get the fuel, the algae are processed into a pulp before lipid oils are extracted to be turned into biodiesel.
There is not one single answer to the issues of dependence on foreign oil and greenhouse gas emissions. It will take a combination of improved fuel economy, investment in public transportation, new technology, and new fuel sources like biofuels and electricity to move us into a more sustainable future.
For more information on Biofuels –read the entire article in Timely Topics – June, 2008
EPA Alternative Fuels: http://www.epa.gov/otaq/consumer/fuels/altfuels/altfuels.htm