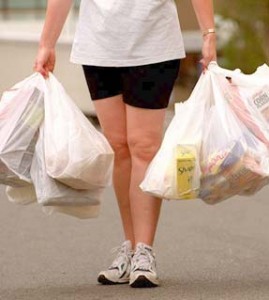 Q: “Paper or plastic?”
A: How about: “Neither, thank you, I’ve brought my own bags.”
Plastic grocery bags have become a world-wide scourge; perhaps you’ve noticed their fantastic aerodynamic abilities? According to Plastic Bag Economics (http://www.plasticbageconomics.com/), plastic makes up 80 percent of the volume of litter on roads, parks and beaches. It makes up 90 percent of litter in the ocean. A square mile of ocean features 46,000 pieces of plastic.

Plastic bags take decades to breakdown, whether they end up in landfill, the ocean or an incinerator. Typically a plastic bag is used for less than 20 minutes, yet will take up to 1,000 years to rot away.

Plastic bags in the ocean are life threatening for sea inhabitants—they are often mistaken for jelly fish and eaten. They can’t be digested and cause death by slow starvation or suffocation. The dead animal’s body decomposes and frees the plastic bag to roam the ocean again.

According to the Times, one of the UK’s leading daily newspapers, a million seabirds are estimated to be killed by plastic each year, plus 100,000 seals, sea lions, whales and dolphins (http://www.timesonline.co.uk/tol/news/uk/article1717476.ece).

Re-usable shopping bags are slowly working their way into peoples’ lives—not a minute too soon! I’ve heard some people say that they forget to bring their re-usable bags to the store when shopping. I was one of those people, until I began collecting canvas bags. They are becoming widely available, and are often free give-aways at green markets and home shows. I’ve now got a collection of about ten bags. I keep half of them in the car; I don’t think I’m ever 10 feet from one!