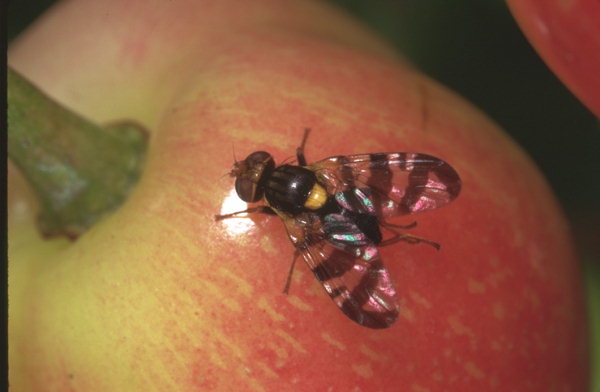 The European cherry fruit fly is a major pest of cherry crops in Europe. APHIS confirmed this pest was found in New York in September of last year. This pest primarily attacks cherries, and can cause 100% crop loss if uncontrolled. European cherry fruit fly prefers dry climates, and cherries are not produced in Florida, so it is unlikely to be a problem in our state. But if you own a warm-climate cherry tree, such as the Sargent Cherry (Prunus sargentii), be on the look out for this fruit fly. For more information, check out this Fact Sheet from Michigan State University Extension by T. Noma et al. 2010. Note the black body and yellow spots on the head and thorax. Wings are transparent with four dark stripes. Note the third stripe, which is a small notch. Pitted marks on fruits are noticeable after oviposition. As larvae develops, damage on fruits appears as brown, rotted legions.