Take a sneak peek with this excerpt from the article: Xyleborus affinis is one of the most widespread and common ambrosia beetles in the world. It is also very common in Florida. Due to its natural attraction to freshly dead wood, the species can be a structural pest of moist timber before the wood is treated. It is also commonly assumed to be the source of tree death because of its abundance in dead or dying trees, but confirmed records of Xyleborus affinis attacking healthy trees are rare. Even in the cases where damage on healthy trees is reported, it is quite likely that the trees have been under some prior unapparent stress, such as recent excess of water.

Like other ambrosia beetles, Xyleborus affinis bores tunnels (called galleries) into the xylem of weakened, cut or injured trees where a symbiotic fungus is farmed for food. Females lay eggs in the fungus-lined galleries and larvae feed exclusively on the fungi. 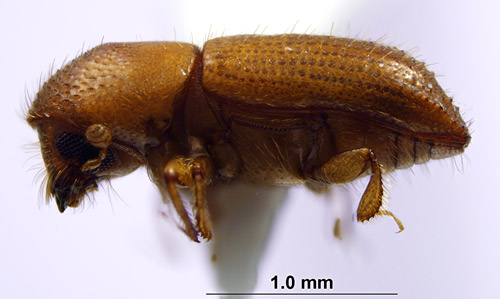