Take a sneak peek with this excerpt from the article: Nylanderia fulva was previously confused with Nylanderia pubens (Synonym: Paratrechina pubens). Nylanderia fulva is native to South America where the type locality is Brazil (Gotzek et al. 2012), whereas Nylanderia pubens may have originated from the St. Vincent Island and the Lesser Antilles (Trager 1984, Forel 1893). Samples of Nylanderia pubens collected in Coral Gables and Miami, Florida, date from 1953 (Trager 1984). Klotz et al. (1995) report infestations in Boca Raton, Homestead, and Miami and state that “in 1990, hundreds of these ants were found on the second floor of a large Miami hospital.” Deyrup et al. (2000) report that it “is abundant on the campus of the University of Miami, where it resembles a pale Nylanderia bourbonica, foraging on sidewalks and running up and down tree trunks.” L. Davis, Jr. (2003 personal communication) has seen these ants from Everglades National Park, Fort Lauderdale, Jacksonville, and Port St. Lucie. Specimens from Sarasota (F. Santana 2003, personal communication) were also confirmed. These ants seem to have large populations where they occur and are considered a pest in Colombia (Davis 2003, personal communication). 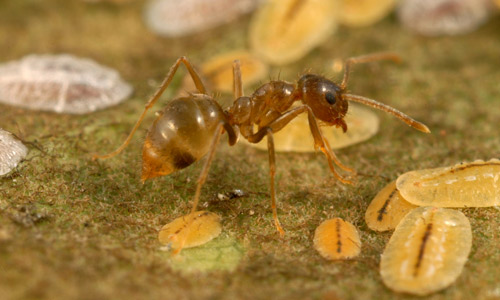