Take a sneak peek with this excerpt from the article: The beautiful Io moth, Automeris io (Fabricius), is one of our most recognizable moths. It is distinctive because of its prominent hind wing eyespots. The Io moth, like many of the other saturniid moths, is less common now in parts of its range. With the exception of Cape Cod and some of the Massachusetts islands, it is now rare in New England where it was once common, and its populations have declined in the Gulf States (with the exception of Louisiana) since the 1970s (Manley 1993). The attractive Io moth caterpillar is also well-known because of its painful sting. 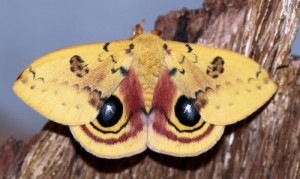