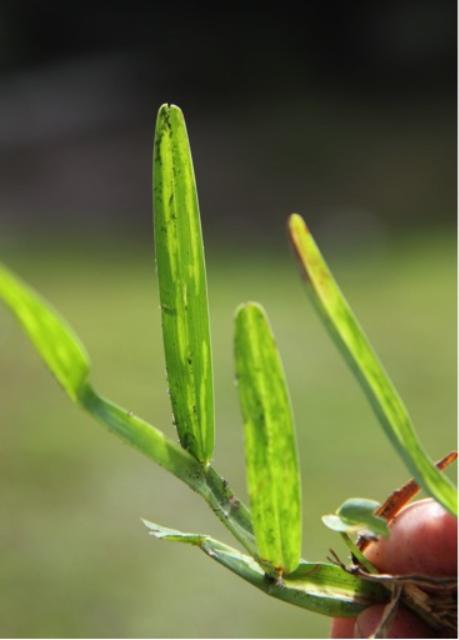 Mosaic disease of St. Augustinegrass was first reported in the 1960s in sugarcane producing areas of Palm Beach County, Florida. In the 10 years prior to 2013, less than 5 samples with mild symptoms were brought to the attention of the extension turfgrass pathologist. But in September 2013, an outbreak of the disease occurred in Pinellas County. Leaf symptoms included mosaic, but turned necrotic and the severe dieback that completely killed some infected lawns. In September 2014, lawns infected in 2013 and new lawns started dying in both Pinellas and Palm Beach Counties. Despite the similarity of symptoms to another St. Augustinegrass decline (SAD), as of November 2014, all samples have tested negative for SAD, and positive for presence of Sugarcane Mosaic Virus.

This 3-page fact sheet was written by Phil Harmon, and published by the UF Department of Plant Pathology, November 2014. http://edis.ifas.ufl.edu/pp313

Dr. Amanda Hodges serves as the Director of the DPM Program. Her position is 50% teaching and 50% extension. DPM overall administrative responsibilities and teaching the following courses are included in her duties: ALS 4161/6166; ALS 6925; ALS 6931; and ALS 6943. ...