This isn’t breaking news, since the USDA Animal Plant Health Inspection Service (APHIS) declared the cotton seed bug eradicated from Florida and the continental U.S. in March of this year, but I thought you might enjoy hearing that there is one less bug in Florida as you slap away mosquitoes and chase palmetto bugs out of your house in these balmy, itchy, late-summer days. This eradication effort was accomplished through the work of Florida Cooperative Agriculture Pest Survey (CAPS) in cooperation with USDA-APHIS.

The cotton seed bug, Oxycarenus hyalipennis, is a small hemipteran (the “true bugs”) insect that feeds on cotton seeds, fouls the cotton lint, and emits a nasty smell. Cotton seed bugs stain the cotton lint when their bodies are crushed during the ginning process, which reduces the quality and economic value of an affected crop. They feed on plants in the cotton family, including okra and hibiscus, and can damage the fruit and seeds of other plants as well. The presence of cotton seed bugs in Florida created an ecological problem too: they infest wild or upland cotton, an endangered native Florida plant.

This invasive pest was first detected on Stock Island in the Florida Keys in 2010. Through the survey, regulatory, and control efforts implemented after cotton seed bugs were found, APHIS declared them eradicated from Florida and the continental U.S. after three years of negative detections. Eradicating a new pest is most probable if the pest population is limited to a small area, the population density is low, and the pest is detected soon after introduction. All three conditions contributed to the successful eradication of cotton seed bug from Florida.

If you’d like to learn more about cotton seed bug, you may enjoy this module from the Collaborative and Enhanced Community First Detector Training. 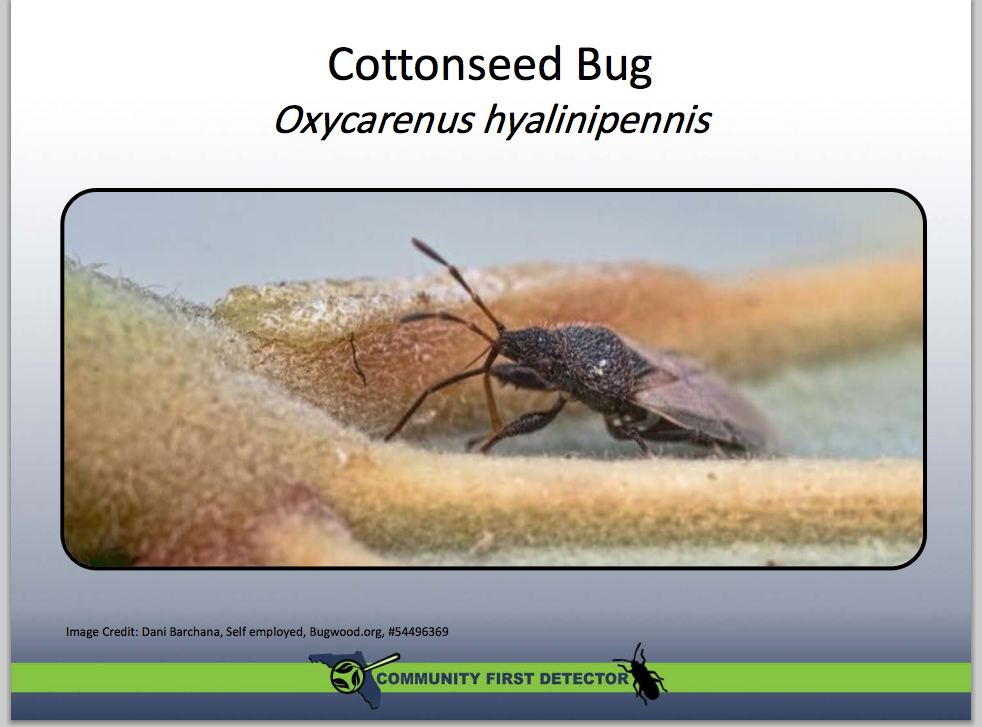