Take a sneak peek with this excerpt from the article: Tussock moths in the genus Orgyia are small moths that are best-known because of their attractive larvae. 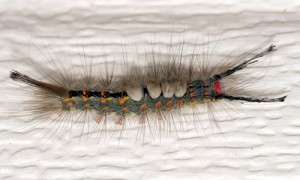 In some years the larvae are very numerous and become a problem when they leave their host plants to search for suitable sites to spin their cocoons. Only the three species that are found in Florida will be discussed here. Orgyia detrita (the fir tussock moth) is the most common of the species in Florida followed by Orgyia leucostigma (the whitemarked tussock moth) and finally Orgyia definita (the definite tussock moth), which is rare in Florida (Foltz 2004).

Much of the older literature places the tussock moths in the family Liparidae and more recently in the Lymantriidae. They are now classified in the subfamily Lymantriinae in the family Erebidae (Beadle & Leckie 2012). Orgyia leucostigma was formerly placed in the genus Hemerocampa. For a detailed taxonomic history and synonyms, see Ferguson (1978).