Take a sneak peek with this excerpt from the article: The eastern bloodsucking conenose, Triatoma sanguisuga (LeConte), belongs to the subfamily Triatominae, known as the kissing bugs. Kissing bugs are members of a larger group known as assassin bugs. Assassin bugs are named for their habit of attacking and voraciously feeding on insects with their piercing-sucking mouthparts. In this way, assassin bugs can reduce pest insect populations, and are considered beneficial (Drees and Jackman 1999). Kissing bugs, despite their affectionate vernacular name, are particularly threatening “assassins” who require blood meals to survive and reproduce. 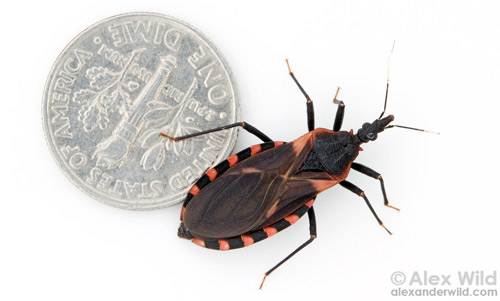 Triatoma sanguisuga (LeConte), the eastern bloodsucking conenose, with a dime shown for scale. Photograph by Alexander Wild, used with permission.