Take a sneak peek with this excerpt from the article: Originally considered to be Euglossa viridissima; Eltz et al. (2011) found the orchid bees in Florida to be Euglossa dilemma, a newly described cryptic sibling species of Euglossa viridissima. Green orchid bees are a quite conspicuous and charismatic species. This is mostly due to their large size and bright metallic-green coloration, which covers their entire bodies. They are roughly the same size to slightly smaller than a honey bee, usually about 1.3 cm in length. Since this introduction, the green orchid bee has become well established in South Florida. Current reports of this species are mostly from Broward, Palm Beach and Dade Counties. However its future distribution has been predicted to include almost half of peninsular Florida. Following a line that runs from Tampa to West Palm Beach and south, the potential range extends the entire southern tip of the Florida Peninsula. 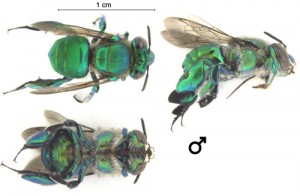