Our state animal, the Florida Panther, is our most famous member of this group, today we want to talk about the Everglades Snail Kite bird. This bird is one of our local birds here in Osceola County.

These few birds live in the shallow marshy areas of Lake Toho and they hunt for Apple Snails as they fly low, gliding above the marsh grasses and shallow waters where the snails are found. In addition they can found on Lake Okeechobee, the Loxahatchee, and the Everglades National Park.

What do the birds look like? How do you know if you see one?

What about their diet?

While our native Apple Snails are declining, we also have 4 exotic ones, including the channeled apple snails, island apple snails, and giant apple snails. These are larger, and some are even able to tolerate man-made things such as retention ponds. Fortunately, the snail kites do not seem to care which kind of Apple snail they eat. To capture a snail, the snail kite often perches on some low vegetation until he spots one. He might also scan the area by air. Gliding slowly over the marsh, the kite swoops down and picks up a snail with one foot and carries it home. At some point, during the flight, the snail is transferred from the foot to the beak. After landing, the prey is once again held with one foot while the curved bill easily excavates the meat from its shell. Favorite dining spots are often decorated with a collection of large, empty shells.

Nests are a platform of soft stem wetland plants and sticks, built over water, in low trees or shrubs, and are usually 3 to 15 feet above the water. They are usually close to the unflooded area where the shell collections are found. In the past, 4 eggs were laid, but currently the number is 2-3 eggs, as less snails are available. The eggs hatch in 26-28 days (about 4 weeks), and the parents feed them snails for 9-11 weeks (about 2 and a half months). After 6-7 weeks (about 1 and a half months), the babies can fly.

But why are these birds endangered?

Restoration is being worked on in the Everglades and larger lakes. Native wetland vegetation is being put back, and there are attempts to exterminate invasive plants. Perhaps we can also naturalize our own ponds or wetlands with appropriate native plants. If you have a pond or wetland area, do not drain it, in case some apple snails may have found it. It is thought that snails and birds are now expanding their Lake Toho habitat to nearby areas.

Explore wetlands quietly if you want to catch a glimpse of a bird or two. 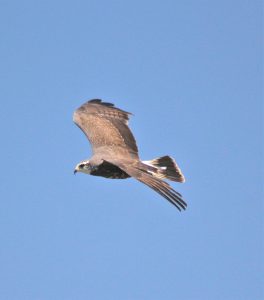 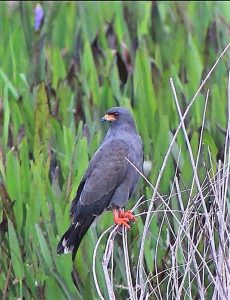 For more information about Florida Friendly Plants you can email me at epabon5@ufl.edu or like us to learn about new classes or events at  Gardening in Central Florida

Do you want to read more about gardening? Follow our blog Eva Pabon, Author at UF/IFAS Extension Osceola County (ufl.edu)