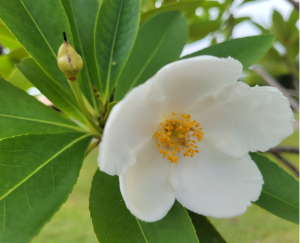 Loblolly-bay tends to produce flowers over a relatively long window throughout the summer.

Lobllolly-bay is a native species with which many gardeners have yet to be acquainted. Although a native to the American southeast, the white flowers would have appeal within many Old World gardens that often prized subdued palettes and appearances of botanical specimens. At first glance, the conical trees tend to look like southern magnolias with small flowers and shiny, serrated leaves. If there is something that looks familiar about the flowers, it is because they probably are in some ways. The flowers are reminiscent of tea or camellia flowers, and to some extent, the medieval depiction of a rose – a representation that is more in line with the ancestral version of the rose that was less showy compared to our modern roses that have undergone morphological shifts via breeding. Loblolly-bay is a member of the Theaceae or tea family – so the comparison to tea or camellia flowers would not be far-off. 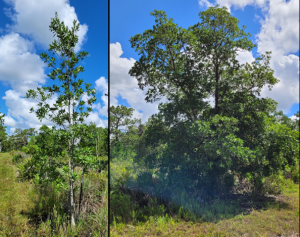 The form of a young tree (left) and mature tree (right).

So why isn’t this plant more popular in landscapes? For one, it’s a bit of an unknown commodity. When people request flowering plants in the Florida landscape, they are typically suggested Southern Magnolias and crape myrtles, both of which tend to be hardy plants that also flower more abundantly throughout the summer months. Moving from USDA Plant Hardiness Zone 9B south also opens up the prospect of more and more tropical flowering plant material. This demure plant is often overlooked relative to the more colorful alternatives like plumerias, tabebuias, shower trees, poincianas, jacarandas, etc.

Despite this plant’s stately beauty, there is another reason that loblolly-bay is not more widely seen in the cultivated landscape. Just like Blanche DuBois, this belle does not adapt well to uprooting – particularly into urban areas. Loblolly-bay is considered to be somewhat of a challenge to establish and cultivate – even compared to their cousins the camellias, which have their own horticultural issues (e.g., slow rate of growth, advanced propagation techniques, problems with scales and mites, etc.). However, once established, these trees tend to require little to no maintenance. 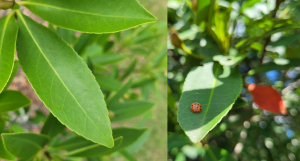 Leaves of loblolly-bay are serrate and can turn red with seasonality (right – background).

A native to the lower eastern coastal plain, this plant is well-adapted to heat. Loblolly-bay can be found in flatwood lowlands, typically on wet sites. It is one of the few members of the tea family (i.e., Theaceae) and the only Gordonia in North America. Despite not being a common species, it is extremely widespread compared to other native members of the tea family (i.e., Stewartia malacodendron, Stewartia ovata, and the virtually extinct Franklinia alatamaha). At first glance, this tree looks very similar to many other lowland species called “bay” trees that comingle in lowlands together. These trees are termed “bays” in reference to their superficial appearance to the Old World bay (i.e., Laurus nobilis) that some might be more familiar with from the kitchen. The bay trees all have “leafy” leaves that are relatively large and leathery, and membership in the “bay club” includes sweetbay magnolia (Magnolia virginiana), southern or bull bay magnolia (Magnolia grandiflora), red bay (Persea borbonia), and swamp bay (Persea palustris). Ironically, many of these trees are not closely related, and highlight the importance of identifying key botanical features despite the shared moniker of “bay.” Only the red bay and swamp bay are actually related to the true European bay laurel, which is the namesake for their entire family (i.e., Lauraceae). Regarding “loblolly” – some readers might already be familiar with loblolly pine (i.e., Pinus taeda), but the term was used to denote muddy or swampy areas. Hence, loblolly bay and loblolly pine were more likely to be found in wet areas with poor drainage relative to other bays or pines, respectively. With its shallow root system, Loblolly-bay is particularly well-suited to wet sites and is sometimes silviculturally managed for pulp production in areas not suitable for pines due to extremely poor drainage. 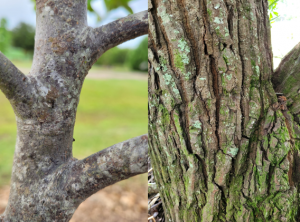 As stated previously, loblolly-bay is not the best adapted plant for transplanting and establishment, but there are a few pointers for those interested in cultivating this gem of the swamps. Plants grown from containers tend to establish better than those removed via digging or tree spades. Even in natural areas, these trees are not known to be particularly long-lived despite being relatively slow growing, so expectations should be tempered to this plant’s limitations. The root systems of these trees are relatively shallow, and should be watered during periods of drought. The species is fairly tolerant of shade, and generally requires more watering when grown in full sun. With the exception of ‘Variegata,’ there are not many cultivars available, which may also relate to the difficulties with this plant’s cultivation and relative unpopularity among potential growers, landscapers, and homeowners. However, it has been hybridized with Franklinia alatamaha  (i.e., a relative that is extinct in the wild) and that crossing is known as “x Gordlinia grandiflora” botanically, but with the common name of “mountain gordlinia” or “sweet tea.” Despite the potential issues with loblolly-bay, the fate of these trees does not need to be tragic; many of those that have gone out of their way to acquire this uncommon plant material and grow it in their landscapes value its aesthetic qualities and ease of maintenance. For those those seeking to add native plants to their properties or plantings, this is a tree that should not be overlooked. With extra emphasis on overcoming the obstacles of acquiring uncommon plant material and the extra attention necessary through establishment and drought, loblolly-bay could be more popular and deserves more widespread planting throughout much of Florida. 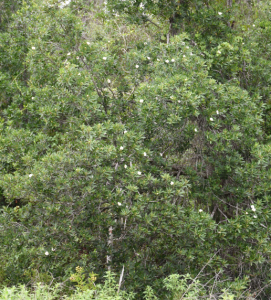 Loblolly-bays can sometimes be seen along roadways in dense thickets – these specimens are along I-4 between Orlando and Lakeland.

← New Vegetable Gardener — Herbs are a Cool Season Crop in Central Florida
Consider Getting Vaccinated Before the Holiday Season! →