Not that poinciana… and not that one either… 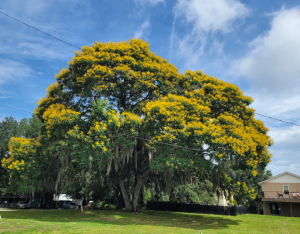 Yellow poinciana trees can grow to relatively large trees of >50ft in height.

Throughout late Spring to mid-summer certain streets of the I-4 corridor are inhabited by hulking yellow figures that peer over buildings and walls throughout the urbanized landscape. Despite their enormity and vibrant nature, few know their name, origin, or really all that much at all about them. Upon closer inspection of these frozen fireworks displays, there is a deep green undercoat that suggests a leguminous origin. When the flowers fade, they are eventually replaced by brown wind-dispersed pods. That suspicion of being lumped in the bean (i.e., or legume) family would be correct… this is the South American yellow poinciana (Peltophorum dubium), another member of the Fabaceae family with an intense flowering capacity. 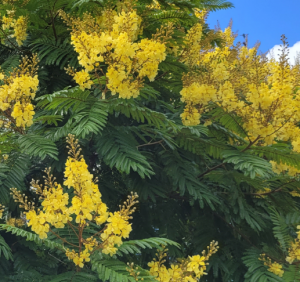 Foliage and flowers of the yellow poinciana.

When most hear “poinciana” the orange to red royal poinciana (Delonix regia) typically comes to mind. There are some superficial similarities between the distant cousins (i.e., yellow poinciana and the royal poinciana trees), but they do not bear particularly close resemblance to one another to the trained eye as the royal poinciana tends to have more pairs of secondary leaflets (i.e., 25-35 pairs vs 8-20 pairs for yellow poinciana), buttressed roots, and an almost “extreme” vertically spreading form with a height maxing out at ~30 ft (i.e., compared to ~55 ft for the yellow poinciana). Flowers and pods are also quite different if they are present. There is one potential hang up, there is a yellow cultivar of the royal poinciana known as ‘flavida’ or ‘flava’ that has golden yellow flowers – however, the flowers are dark-golden yellow and the backside of the petals are “splashed” with white and red.

That was the easy part… the yellow poinciana that inhabits Central Florida is a living testament to the importance of scientific names, since there are actually two species that go by the assumed name of “yellow poinciana.” There are a couple of morphological traits that can help differentiate the “yellow poincianas.” The easiest distinction is the seed pods – the pods from the Asiatic yellow poinciana (Peltophorum pterocarpum) are larger, more rounded, and coppery in color. This has led to its other common name “copper pod.” The budding flowers of P. pterocarpum also have the coppery color while the budding flower blooms of P. dubium are uniformly the same yellow as the flower petals. Lastly, are the botanical records, as P. dubium has been vouchered in Central Florida while the records of P. pterocarpum are constrained to South Florida. This makes sense since almost all of the literature covering both of these species mentions that P. dubium is relatively cold tolerant – some of the larger trees in Central Florida would have weathered multiple frost events that may have caused more severe damage to P. pterocarpum. 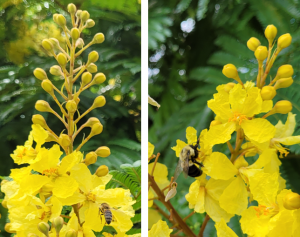 Flowers being visited by hymenoptera pollinators.

Known as cambuí, ibira-pita, or arbol de Artigas in its native range – this tree is heavily associated with José Artigas, a national hero of Uruguay, since the tree was present at his Paraguayan home throughout the final years of his life as an exile. Offshoots of these trees were then replanted to the city of his namesake in Artigas, Uruguay, where they are still found to this day.

The flowers are fragrant, with an aroma reminiscent of grapes. Bees are particularly drawn to the flowers. This tree is a pioneer species and is not exceptionally shade tolerant. Like many other early succession species, the seed pods are light and wind dispersed. 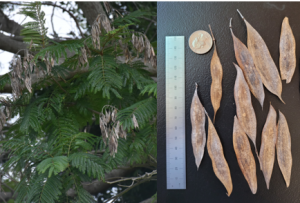 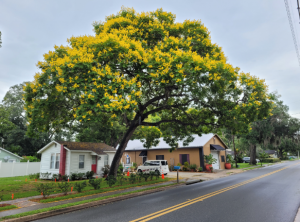 Yellow poincianas can liven up residential areas, but should probably be planted away from buildings and other sensitive infrastructure.

Like many other trees within the legume family (i.e., cassias, mimosas, orchid trees, sennas, albizias, acacias, etc.), these trees are fast growers and can vault up to 30’ in the first 3 years of growth. There are pros and cons to fast growing trees. They can fill in a space and throw out a lot of shade in a relatively short interval. However, the yellow poinciana has relatively brittle wood. These trees tend to have shallow root systems and are not particularly resistant to strong wind or storms, so caution is recommended before planting them too close to structures or spaces heavily occupied by vehicles or people. Another potential concern is the tendency to sprout multiple stems. Cutting the tree back to a single stem while it is young will promote better structural integrity as the tree matures. 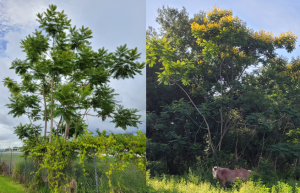 Volunteer trees can be common in unmaintained areas.

These trees have a high drought tolerance – a desirable trait for dry spells and the sandy soil conditions of Central Florida. The prolific flowers also translate to prolific seed abundance. The trees are well-suited to urban conditions and volunteer trees tend to appear in close proximity to established specimens. Although this species is not considered an invasive, some consideration against planting may be merited when adjacent to natural areas. 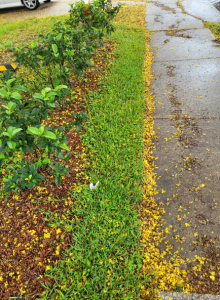 Debris from yellow poincianas can be undesirable for some property managers during flowering season.

Yellow poincianas tend to flower annually but will sometimes not flower the following year when the tree has retained the pods from the previous season. Like other heavily flowering tree monsters that shed their seasonal coats, debris can also be an issue. The flower remnants are relatively light in weight but can be abundant throughout the early summer. This may limit the usefulness of the tree where the maintenance of a clean landscape appearance is a high concern. 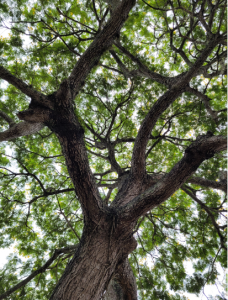 The view looking into a yellow poinciana’s canopy.