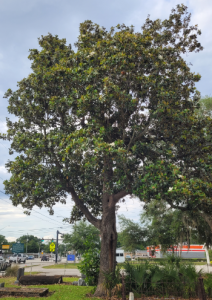 Adapted for the heat of the Deep South, these large trees tend to thrive in most of Florida. Magnolias are a staple landscape material, and perhaps outside of the live oak (Quercus virginiana), very few large trees possess the combination of utility or aesthetic appeal within the Central Florida landscape. With large, white flowers and glossy leaves, these trees strike a balance between dapper and inconspicuous. Another bonus of Southeastern evolution and origin, southern magnolias hold up relatively well to hurricanes and the prevalent storm conditions of Florida. 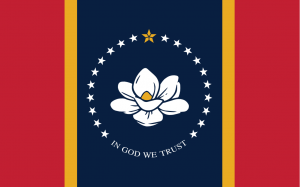 The state flag of Mississippi.

Much like the contemporary reinfatuation with the trade of vinyl records, these hipsters of the plant world were swapping pollen via insects before it was cool. Magnolias and other early angiosperms evolved before bees, wasps, and butterflies had yet to make a huge impression on the ecological scene of the Cretaceous period (145 – 66 million years ago) – and this meant making do with ill-suited procreative minions. To put it another way, magnolia morphology evolved for the rigors of beetle pollination with simple flowers and sturdy carpels that could hold up to the fervid advances of armored insects. Angiosperms would eventually let off a collective sigh of relief in the Cenozoic with the expansive evolution of gentler pollinators like lepidoptera (i.e., moths and butterflies) and hymenoptera (i.e., bees, ants, wasps, etc.) resulting in the overwhelming diversity of contemporary flowers and pollinating insects that we know today. Magnolias may lack “modern” complexity but are a throwback to simpler times predominated by flowers with whorled petal arrangements, nondistinctive differentiation between sepals and petals, and pollination via a single pore. “If it ain’t broke, don’t fix it” is the creed of the magnolia tree. 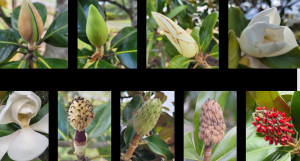 The Latin name for the genus Magnolia was picked by Linnaeus to honor the French botanist Pierre Magnol, and grandis was a reference to the large size of the flowers. The Magnolia is native to the Southeastern United States, but the flower’s subtle yet grand presentation complement Old World garden sensibilities that favor subdued and muted colors. Perhaps this is why this versatile tree has found a home in southern iconography and is forefront on the new Flag for the State of Mississippi. Southern magnolias are often a codominant species of many lowland forests throughout the coastal plain and tends to associate with sweetgum (Liquidambar styraciflua), water oak (Quercus nigra), and tupelo (Nyssa sylvatica). Native wildlife have many uses for the tree, and in particular, certain bird species mammals are drawn to the red seeds. 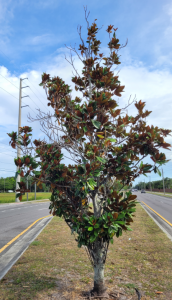 Magnolias can be susceptible to die-back, especially on dry sites with limited belowground growing space. 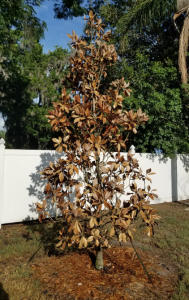 Drought can also be problematic for magnolias – particularly during establishment.

Don’t let the graceful flowers fool you – Magnolias may not be made of steel, but they tend to be hardy and reliable landscape plants. As a lowland species, they often perform well in compacted and poorly-drained soil conditions, but cannot survive on sites that are regularly inundated with standing water. A generalist, the trees are capable of surviving on sandy well-drained sites, but thriving there can be an issue when sites are particularly infertile and well drained. Relative to other commonly planted trees in urban environments (e.g., live oaks) southern magnolias tend to have more issues with drought and dieback. Therefore, consideration should be given to these trees on sandy sites in terms of drought, particularly during establishment.

With the champion tree of 111 ft tall, southern magnolia trees can grow to be quite large. Like any tree being put into the ground, relation to buildings and infrastructure should be given consideration. Fortunately, these trees are not particularly fast growers, and tend to focus more of their growth vertically than horizontally (i.e, in contrast to standard live oaks). For those seeking the appeal of these plants in a confined space, a dwarf cultivar known as ‘Little Gem’ is in wide commercial propagation and is also reported to be slower growing. There are also columnar cultivars available for areas with limited horizontal space (e.g., ‘Hasse’)

The shedding of large leaves that are difficult to move with leaf blowers and dropping of woody fruit that can dull lawnmower blades can sometimes prove to be problematic in heavily manicured environments. However, almost all trees require some level of upkeep, and “Right Plant, Right Place” should be observed prior to the planting and establishment of southern magnolias if concerns exist over landscape debris.