Tired of the constant upkeep and long-term costs of maintaining your turf? How about the water bill? Do you have concerns about water pollution and nutrient run-off? Have your hard efforts to maintain grass been only reciprocated with patchy growth or persistent problems with pests and disease (e.g., chinch bugs, sod webworms, gray leaf spot, etc.)? If you are finding yourself less than committed to your turf lawn, it is worth remembering that there are no nuptial vows tying you to it. Turf lawns are largely a cultural phenomenon, and leaving a bad relationship with your turf has never been so easy or socially acceptable. Just remember that sometimes the grass can be greener on the other side of the fence, in particular when the grass isn’t a grass at all, but a legume capable of producing its own nitrogen. If you are considering an alternative lawn lifestyle, there is a plant out there that would love to meet you. It doesn’t have the same environmental hang-ups and high-maintenance needs as turf – and if you treat it right, it will provide you with an unending bouquet of yellow flowers, and maybe even a lifetime of happiness…

This plant is the perennial peanut (Arachis glabrata) – a broadleaf plant and a member of the pea family. After establishment, perennial peanut is relatively tolerant of neglect, requiring little to no water or fertilizer. A native to South America, this plant has a tropical background, but is also forgiving of the coldest conditions Florida has to offer. Historically, the plant has been used more as a forage for livestock, but increasingly, has also been held in high-esteem for its horticultural use in urban landscapes. It spreads aggressively with “clonal” belowground rhizomes, which is ideal for establishing as a landscape groundcover.

Perennial peanut ideally grows in full sun, and prefers well-drained sites. A variety of methods exist for its landscape establishment – including plugs, sod strips, and sod mats. Planting is best performed from January to March when the plants are not actively growing. Weed control is critical in the early phases of putting it onsite, since broadleaf weeds cannot be controlled chemically after establishment without also impacting the perennial peanut. All other plants should be removed in the intended planting area for perennial peanut to be established. Prior to planting, these cleared sites would also benefit from the use of pre-emergent herbicides to minimize potential competition from seedbanked weeds in the soil that could later sprout and compete for space and belowground resources with the perennial peanut. Once established, the plants are very low maintenance and do not require mowing or irrigation. The tenacious roots on established plants are capable of soaking up belowground moisture even under droughty conditions (see below).

How does it compare to turf?

Economic analyses have also been performed on perennial peanut compared to St.Augustinegrass. The initial cost and labor of establishment is greater for perennial peanut, but in the long-run, the plant will cost less than turf over its lifetime. 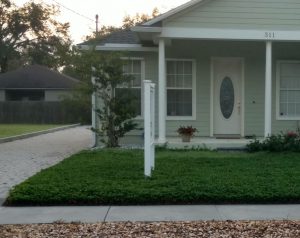 There are also some important disadvantages. Perennial peanut does not hold-up very well under heavy foot traffic relative to most turfgrasses. Additionally, it does have a high requirement for light, so other plant materials or mulch still have to be used in low-light areas of the landscape. Poorly-drained sites are also not particularly well-suited to the establishment of perennial peanut. Plant material can be somewhat difficult to source, but it is becoming more common in garden centers and sod farms.

For more information on perennial peanut or alternative lifestyles in lawn management, see the following links: