2020: a year of a global pestilence, a record number of Atlantic basin tropical systems, global wildfires, suspicious Chinese seed packages, and toilet paper shortages. Enter, the “MURDER HORNET” – an invasive hymenoptera with a painfully debilitating sting. Media reports have covered this insect in a similar fashion to the introduction of Africanized honey bees or “killer bees” in the 1980’s – that is to say, with excessive sensationalism. You should rest easy for now on “murder hornet” concerns.

What are the facts – should we be alarmed? Do we now need to contend with “MuRdER HoRnETS” in addition to other Florida invasive animals like Burmese pythons, feral swine, and disease carrying monkeys? The short answer is, probably not. The giant Asian hornet (Alias: “murder hornet” – Vespa mandarina) is currently confined to only a few localized areas in Washington state. We are currently the furthest away from these introduced populations that one can be in the continental United States (i.e., ~3,000 miles). Entomologists have also determined that their potential spread through much of North America will be extremely slow due to the unsuitability of the arid regions within the Western U.S. for colonization. In the meantime, government teams in Washington are trying to curtail their spread and potentially eradicate these unwelcome aerial invaders.

As the situation evolves, the constant press reports have still made us both consciously or unconsciously on the lookout for traces of large stinging insects. County Extension offices throughout the country have had a notable uptick in potential “murder hornet” sightings and identification requests. The most likely suspect for confusion with the Asian giant hornet is the native Eastern cicada killer (Sphecius speciosus).

The Eastern cicada killer is actually a large wasp, and unlike the colony-forming Asian giant hornets, the cicada killers are relatively solitary and deposit their eggs in belowground burrows. They hunt other insects, like cicadas, to bury with their eggs and feed their larva upon hatching. 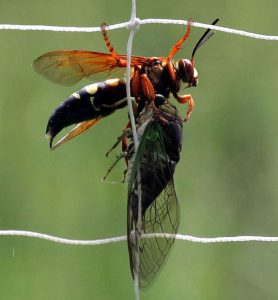 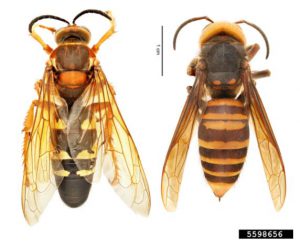 If you need help with an identification or sussing out your wildlife or plant related issues – please visit us at UF/IFAS Orange County Extension.

For more material on the Asian giant hornet, please see the below links: