Skip Navigation or Skip to Content
Home » UF/IFAS Extension Orange County » Did You Know That Orange County Has The 3rd Largest Horticulture Industry In Florida?

Did You Know That Orange County Has The 3rd Largest Horticulture Industry In Florida? 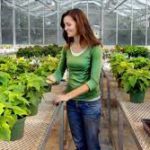 An economic study done in 2015 by the University of Florida Institute of Food and Agricultural Sciences (UF/IFAS) Food and Resource Economics Dept. determined that the central Florida area producers, combined with landscape firms and retail garden centers, totaled $1.83 billion in annual sales. Here’s how it all got started.

In the early 1900s, John Soar found some pretty ferns with large fronds in the Florida Keys. He grew them in his nursery then sent them to friends in Boston. The famous Boston Fern is really a Florida Native!

By 1912, potted ferns became THE industry for Apopka. Growers sold millions of ferns to northern cities in Woolworth stores. Apopka adopted the name “Fern City” and then became known as the “Indoor Foliage Capital of the World” during the mid-1960s. Production of foliage plants increased rapidly between 1949 and 1979.